Gas drilling using hydraulic fracturing “fracking” is a highly industrial process used to extract natural gas from deep within the earth.  Its proponents claim that with proper regulatory oversight, it can be done safely, reduce our dependence on foreign oil and bring about much needed economic benefit. 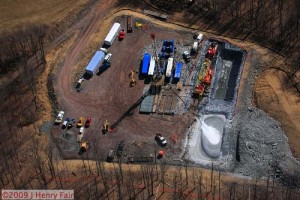 The facts don’t support their claims. Fracking is a dangerous and destructive, extreme form of energy extraction, and it brings with it very serous environmental, health and economic problems.  In the end it leaves communities in much worse condition than when it starts.

Based on extensive study, scientific evidence, and the results of what has happened in other states and communities, Catskill Mountainkeeper had determined that there was no way safe way to extract natural gas from underground using high volume hydraulic fracturing and called for it to be banned in New York State. Mountainkeeper worked with grassroots groups and citizens in communities across the state raise critical issues about health impacts, empower communities to reject fracking and pursue the best options for all New Yorkers.

As a result of these efforts by Mountainkeeper and our partners and allies, in December 2014 Governor Cuomo announced that he would ban high-volume hydraulic fracturing in New York State.

This is an historic win as New York is the first state with considerable natural gas shale deposits to ban the practice. Governor Cuomo should be applauded for putting the people of New York and their interests above the interests of the gas industry.

Unfortunately fracking continues in other states and New York is fighting an invasion of pipelines, trains and barges carrying their fracked oil and gas to markets where Big Oil and Gas can make the biggest profit. Learn more about Mountainkeeper's efforts to Free New York from Fossil Fuels!.