Tar sands, or oil sands as they have been renamed by the oil industry to make them sound more “appealing”, are giant reserves of carbon-saturated earth that are made up of roughly 90 percent sand, clay and water and 10 percent bitumen, a thick hydrocarbon liquid.   Massive amount of tars sands are needed to extract relatively small amounts of oil and it is considered the “dirtiest” of all fossil fuels because converting it to gasoline emits 3 times more carbon dioxide per barrel than conventional oil production. 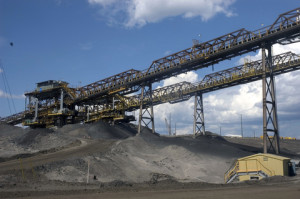 Tar sand deposits are found in many places around the globe.  Alberta, Canada’s boreal forest, one of the largest intact ecosystems on the planet has especially huge deposits.

To extract tar sands, giant shovels carve out open pits in the landscape.  The resulting loss of the forest not only destroys the habitat of wildlife, but reduces the forest’s natural carbon absorbing properties, which if left in place, could lower the amount of greenhouse gas that escapes into the atmosphere.  For a visual presentation of the environmental devastations please click here to see a TED talk by photographer Garth Lenz.

Tar sands are brought to facilities where they are mixed with water so that the bitumen gets separated from the sand when it floats to the top of giant holding tanks. The extracted bitumen is then sent to refineries where it is converted into gasoline.  Since bitumen is a highly viscous “heavy” oil, it requires more processing than conventionally extracted oil so that it can easily flow through oil pipelines.  It takes four tons of tar sands and three barrels of water to extract a single barrel of oil.

A byproduct of tar sands is petroleum coke that is illegal to burn in the U.S. because of its toxicity.  The Koch Brothers are amassing a “mountain of pet coke” in Detroit and are planning to ship this huge pile of high-sulfur, high-carbon waste overseas, where it would be burned as fuel.

There was a proposal to build the Keystone X.L. Pipeline to carry the crude oil extracted from tar sands from processing facilities in Alberta to gas refineries in Texas.  The proposed route of the pipeline was 1700 miles and would go through Montana, South Dakota, Nebraska, Kansas and Oklahoma.  It was projected to cost $7 billion and carry an estimated 800,000 barrels of oil a day.

Leaks from the Keystone X.L. pipeline would sharply increase greenhouse gases, and accidental spills, particularly in sensitive areas, could be disastrous.

Catskill Mountainkeeper strongly opposes tar sands as an energy source because it perpetuates fossil fuels that cause climate change and its dire consequences.  We are actively working to encourage our elected officials to take whatever political risks are necessary to develop clean energy solutions.  We advocate that the same focus and resources be put toward changing our energy paradigm as was put toward projects like putting a man on the moon.

For more information on tar sands please go to the websites of our Extreme Energy Collaborative partners who are fighting tar sands on the front lines.