Catskill Mountainkeeper was one of the first environmental groups to challenge fracking in New York, and our team played a central role in the uphill coalition fight that won the historic 2015 state-wide ban on high-volume hydraulic fracturing in low permeable shale—the first such ban by a state with large, potentially profitable, natural gas reserves.

Mountainkeeper’s unique blend of expert advocacy and political savvy—fueled by the power of our grassroots activist supporters and our staff's fierce determination to win against all odds—were key to the coalition’s success in galvanizing the massive public outcry that finally convinced Governor Cuomo to protect the health of New Yorkers, and the integrity of our environment, from fracking.

Mountainkeeper’s contributions to this fight included shining a light on the fracking’s health impacts and calling for a comprehensive Health Impact Assessment of the practice; pressuring state officials to re-open New York’s drilling regulations; supporting towns in passing their own local fracking bans; and building and uniting a diverse anti-fracking movement including local front-line groups and national organizations.

New York State’s ban is a important victory for the health and safety of our communities and the environment, but the fight is not yet over, both in New York and in other parts of the country.  Mountainkeeper is protecting our success by blocking efforts to undermine or overturn the New York state ban, and by lending our expertise to support the work of allies in other fracking battlefields, like California, Maryland, and Ohio. The fracking victory in New York also continues to provide important momentum for the broader effort to fight projects that perpetuate our nation’s dependence on dirty fossil fuels, and to promote clean, green, and sustainable smart energy policies built around renewables and energy efficiency.

The Catskills is a prime drilling location for natural gas because it sits on top of the Marcellus Shale field, the Utica Shale field and three other target formations.

These are enormous, subterranean layers of shale rock between 6000 – 8000 feet below the surface that run east from the Catskills, south from the Mohawk Valley to West Virginia and west through Pennsylvania and Ohio. The pores and fractures of the shale contain natural gas. Geologists have known about the gas here for years but with new technologies of horizontal drilling and hydraulic fracturing, recovering the gas has become cost effective. 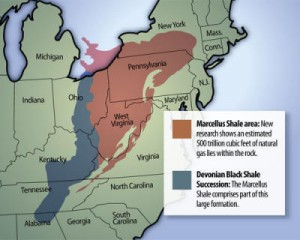 Process for getting gas out of the ground

The process for getting the gas out of the shale is highly industrial and includes numerous truckloads of equipment, toxic chemicals, sand and water along with generators, pumps, drilling rigs and hoists. In addition to the drill, the site contains a large holding pond for the contaminated waste products from the process. The wells run 24 hours a day, 7 days a week and produce exhaust, fumes and noise.  The sound of a drill is comparable to the sound of a jet engine. When gas is found there can be a release of the various gases in the formation.

Fracking is a technique used to create fractures in the shale to allow gas to travel more easily from the rock pores where the gas is trapped, to the production well. In order to create fractures a mixture of water, sand and toxic chemicals is pumped into the rock under high pressure. When the fluid can no longer be absorbed the pressure causes the formation to crack or fracture and allows the gas to flow through the fractures to the well. Some of the fracturing fluids are pumped out of the well and into surface holding pits or tanks but studies have shown that anywhere between 20-40% of fracking fluids may remain underground.

The process of fracking requires millions of gallons of water, which are drawn from area lakes and rivers and transported in large 18 wheeler trucks over local roads. Each million gallons of water in fracking fluid includes 40,000 lbs. of chemicals. Therefore, conservatively, if each individual fracking uses 3,000,000 to 6,000,000 gallons of water there will be anywhere from 120,000 lbs. up to 240,000 lbs. of chemicals. There are reports of some fracking operations taking up to 8,000,000 gallons – that’s 320,000 lbs. of chemicals that will be shipped over our local roads to be mixed onsite with the 800 tractor trailer loads of water. If 70% is recovered from the well that is 5,600,000 gallons of contaminated water to be shipped to a wastewater facility in 560 tractor trailers. This is one well, one fracking operation. There are multiple frackings done at one well and New York State is planning tens of thousands of wells across the state.    (This is based on a tractor trailer load carrying 10,000 gallons a load.)

What is wrong with fracking?

Based on what has happened in other communities, including in neighboring Pennsylvania, we know the dire environmental and health consequences of gas drilling, which is why Catskill Mountainkeeper fought so hard for fracking to be banned in New York State.

There are risks to human health present at every step of the hydraulic fracturing gas extraction process, from the contamination of drinking water sources, noise emissions, compressor stations to the intense truck traffic required over a well’s life–cycle. The detrimental health impacts of fracking have been linked to asthma, infertility, ADHD, autism, diabetes, thyroid disorders, brain disorders, many types of cancer and more.

Fracking has the potential to cause irreparable and widespread contamination of our water supply. These irreversible impacts include contamination of groundwater from the toxic chemicals used in fracking, depletion of aquifers to support the fracking process, and contamination from the production of billions of gallons of hazardous wastewater byproducts produced by this process.

Air pollution is released at all stages of gas drilling operations, however, the volume of emissions from an individual well site generally do not meet the threshold that is required to have air permits, so the type and amount of air pollutants from tens of thousands of well sites that are projected for our state will not be tracked. The typical contaminants that come from fracking operations include:  volatile organic compounds, such as benzene, which combines with nitrogen dioxide in the atmosphere to form ground level ozone; methane which is a powerful green house gas; polycyclic aromatic hydrocarbons (PAHS) which cause cancer; sulfur dioxide (SO2) which creates small particles that get lodged in the lungs and can lead to many health problems and acid rain.  Typical health problems include asthma, cancer, neurological damage, pulmonary reduction, coronary problems, endocrine disruption and headaches.  In The Tupper Green River Basin in Wyoming’s gas land, ozone levels are above those in Los Angeles on its worst days.

Danger to our food supply

Fracking presents a huge danger to our food supply.  Much of the land that is sitting on top of the giant underground shale field is active farmland. Fracking this land has the potential to disrupt farming productivity, endanger livestock health and affect produce and livestock quality.

The threat of earthquakes

There are a rising number of earthquakes in areas where there is hydraulic fracturing and growing scientific information shows that forcing fluids under high pressure deep underground can increase regional seismic activity.

Flooding could be catastrophic

The cycle of global climate change, which has caused unprecedented flooding in the Catskills over the last 5 years is expected to continue.  This could lead to disastrous repercussions if flooding overwhelmed drilling sites and swept toxic chemicals and radioactivity from fracking materials into our general water supply.

Far from being the economic panacea that is promised by the gas companies, the socioeconomic impacts of fracking could have onerous effects on individuals and communities.  It would increase the burden on local infrastructure to maintain the roads and bridges that would be damaged by heavy truck traffic; increase costs to fund emergency personnel for emergency services to deal with industrial accidents; increase the cost for law enforcement to deal with increased crime that traditionally follows the influx of out-of-state workers. Rents would spike in communities and locals would be priced out of the market.  Property values would fall as the land was industrialized which would in turn lower tax assessments and decrease the income to municipalities. If you or your neighbor has a gas well, chances are you would not be able to sell your property, as most banks would not lend on properties that have industrial activity, and you could lose your title insurance for the same reason.  Existing local industries such as tourism, outdoor recreation and agriculture, would all be negatively affected, and the boom and bust nature of gas drilling would likely leave your communities in much worse shape after the drilling rigs leave.

Despite these known hazards, the oil and gas industry is exempt from important provisions of the Safe Drinking Water Act, the Clean Air Act, the Clean Water Act, and other federal environmental laws. The absence of federal regulatory oversight has left it up to individual states to regulate this industry and adequately enforce regulations.