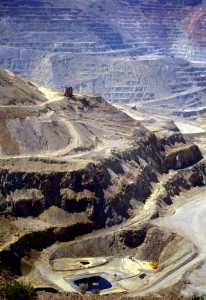 When coal seams are close to the surface a variety of methods are used to extract it including mountaintop removal (MTR), strip mining and open-pit mining. They are all highly invasive and have extremely adverse environmental and health effects.

The surface coal mining process starts by clearing the land to remove all topsoil and vegetation before blasting the area to the coal seams.  Coal is removed by giant earthmoving machines, dumped on conveyors and trucked to coal preparation plants where it is screened, crushed and washed.

The coal industry is required by law to “reclaim” the land, but “reclamation” is often no more than spraying grass seeds.  It is estimated that the natural habitat in areas that have been affected will take more than 100 years to come back.

In Appalachia, which is one of the primary locations of surface mining in the United States, 500 mountains encompassing 1.2 million acres of central and southern Appalachia have already been destroyed.  The population of Appalachia has fared just as poorly.  Studies have found unusually high rates of birth defects, cancer, heart disease, lung disease, kidney disease and mortality.  A recent study done in 2011 by West Virginia University professor Michael Hendryx, “Self-reported cancer rates in two rural areas of West Virginia with and without mountaintop coal mining”, reported that cancer rates in exposed communities were twice as high as those in a non-mining community after factoring in controls for age, sex, smoking, occupational exposure and family cancer history.

Surface mining is very profitable because it requires fewer employees than traditional coal mining.  However, the true cost of surface mining is significantly higher than what is paid by the coal companies because the public, not the companies, pay for the huge public health burden, the loss of tourism in the formerly pristine areas and the damage to the climate caused by extracting, mining, processing and burning coal.  According to a Harvard study, “Full cost accounting for the life cycle of coal”, if the coal companies did pay for full costs of coal, electricity derived from coal would be two-to-three times higher than what it currently is.

The coal industry is planning to ramp up coal mining so that it can export U.S. coal overseas.

Catskill Mountainkeeper strongly opposes surface mining as an energy source because it perpetuates fossil fuels that cause climate change and its dire consequences.  We are actively working to encourage our elected officials to take whatever political risks are necessary to develop clean energy solutions.  We advocate that the same focus and resources be put toward changing our energy paradigm as was put toward projects like putting a man on the moon.

For more information on surface coal mining,  please go to the websites of our Extreme Energy Collaborative partners who are fighting on the front lines.