Today President Trump announced his decision to withdraw the US from the Paris climate agreement. This is a reckless international disgrace. Change begins at home, which is why Governor Cuomo's executive order is so critically important.  Making it state policy to reduce emissions to 80% below 1990 levels by 2050, and directing all state agencies to develop implementation plans in the next nine months is the perfect place to start. New York's economy is huge - our GDP was $1.405 trillion in 2014 making it one of the largest in the world. Climate policy here will help drive policy nationally.

Even as we laud today's bold moves, there is always more to be done. We urge the Governor and the Legislature to pass legislation to compliment this order and ensure home rule supersedes any weakened national environmental policies under this administration.

Today, Catskill Mountainkeeper joined with 182 organizations in four states to tell the Delaware River Basin Commission to ban fracking in the watershed.

As our own Wes Gillingham said, “New York State banned high volume fracking because of the overwhelming scientific evidence of its threats—especially those to public health. The Delaware River Basin Commission must do the same. This is the only course to protect our water, air, health and communities—it’s one that Pennsylvania’s Governor Tom Wolf supports, one that New York’s Governor Cuomo has implemented, and we urge all of the commissioners to follow their lead.”

Read the full release and letter here.  And watch Pennsylvania's Governor Tom Wolf commit to supporting a fracking ban in the watershed here (h/t to our friends at Food & Water Watch for capturing the moment on video).

Statement on the Second Anniversary of New York's Fracking Ban

Under pressure from the oil and shipping industry, the U.S. Coast Guard is considering a proposal to establish 43 new anchorages for oil barges along the Hudson River from Yonkers, NY to Kingston, NY. These anchorages would serve the oil industry by creating an outlet for dirty oil arriving by rail into the Port of Albany, and would dramatically increase oil transportation along the Hudson River.

We are Seneca Lake! 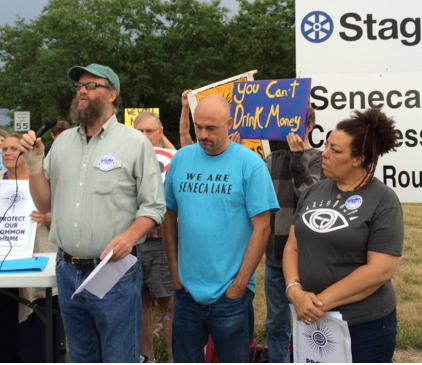 "Seneca Lake and the Catskill Mountains are connected by a pipeline. We are also connected by beautiful surroundings and by communities that have hope for a better future I love where I live! This storage facility here at Seneca Lake would be connected to the Millennium pipeline, which runs through the western Catskills on its way east and south to the CPV gas-fired power plant in Orange County that is now under construction. Two new compressor stations are proposed along the Millennium pipeline located near my home -- plus another connecting pipeline coming directly from the gas fields in Susquehanna county PA."

Livingston Manor, NY – The New York State Assembly extended the Empire State Film Production Tax Credit Program to the Catskills and Hudson Valley Wednesday night, a move that will encourage film production in the region and foster economic growth. Mountainkeeper and our members have been strong advocates for the legislation. On March 21st, 2016 we submitted a letter to the Governor requesting the expansion of the Tax Credit to the Catskills and Hudson Valley that was signed by over 30 entertainment professionals including Chevy Chase, Natalie Merchant, Debra Winger, Mary-Stuart Masterson, Mark Ruffalo, Jon Bowermaster and Aidan Quinn.

Posted by Linda Lopez · April 22, 2016 6:23 PM
The NYS Department of Environmental Conservation (DEC) stopped the Constitution Pipeline in its tracks today by denying the project an essential approval, known as a water quality certification. This momentous decision protects our communities and environment from a 124-mile pipeline that would have carried fracked gas from PA to Canada. Countless communities, over 1,000 acres of forests and farms, and nearly 300 vulnerable waterways are no longer under threat. This decision represents our most significant victory since the Cuomo administration banned fracking last year.
Read more
Share

Groups Rally in Albany to Save NYS from FERC

Albany, NY—Groups from across New York State – and beyond – rallied at the State Capitol today against the bias of the Federal Energy Regulatory Commission (FERC) for fracked gas infrastructure projects. They asked Governor Cuomo to use the State’s authority under the Clean Water Act to stand up to FERC by denying the 401 water quality certificate for the Constitution Pipeline.

Hurleyville, NY - To boost film production outside of New York City, the 2013-14 State Budget included language to create an additional 10% film tax credit for “Upstate” counties. However, bizarrely, Hudson Valley counties, including Sullivan, Ulster, Orange, and Dutchess, were not considered “Upstate” for the purposes of the credit and have been unable to tap into this lucrative economic development opportunity.

Yesterday Governor Cuomo urged the Federal Energy Regulatory Commission (FERC) to halt all construction on Spectra’s controversial Algonquin Incremental Market Expansion (AIM) Pipeline while the New York State Department of Homeland Security and Emergency Services (DHSES), Department of Environmental Conservation (NYSDEC), Department of Health (NYSDOH), and Department of Public Service (DPS) perform an independent safety risk assessment. The four agencies sent a letter to FERC requesting that “FERC stay and reconsider its prior determination to grant a certificate of public convenience and necessity to ensure that the health and safety of all New Yorkers is adequately protected.”

Catskill Mountainkeeper strongly supports the Governor in this action. The AIM pipeline, opposed by many local communities and their elected officials, would have disastrous effects on New York State, surrounding areas, and the planet. It would bring toxic fracked gas through New York communities, threaten the Indian Point Nuclear Facility, and exacerbate climate change, wreaking havoc on communities and the environment throughout the construction process.

“We are especially encouraged by the joint agency approach to the independent safety risk analysis,” said Jessica Roff, Programs Manager for Catskill Mountainkeeper. “We hope this signals the administration’s understanding that all fossil fuel infrastructure decisions have wide-ranging implications that go well beyond just energy access or environmental impacts. That, in fact, a comprehensive and cumulative assessment of such decisions is necessary, and that to perform an appropriate assessment  the government must consider public health, safety, and environmental issues together. We will be watching the process closely to see how the agencies implement this incredibly important task.”