In September 2013, epic flooding in Colorado overran 50,000 oil wells and swept away dozens of condensation tanks that held chemically laden waste from fracking. This environmental disaster has created a health care crisis of yet undetermined proportions.  Colorado’s lax regulations don’t require that drillers release the names of chemicals used in fracking fluid but it known that they are linked to diseases and medical conditions that include many types of cancer, infertility, ADHD, autism, diabetes, thyroid disorders, brain disorders and that chronic illnesses from exposure to these chemicals can take many years to manifest. 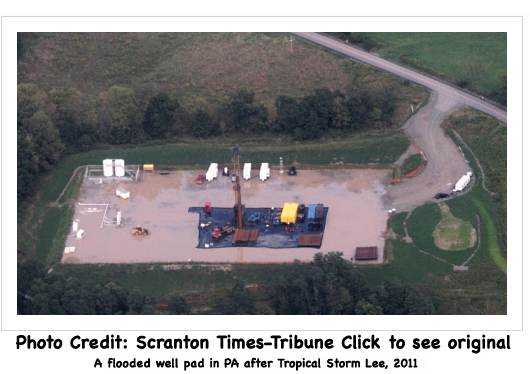 In New York, proponents of gas drilling say we can protect ourselves from this type of devastation by being smarter or having better regulations.  But the magnitude of the tragedy in Colorado eviscerates this theory.

While the regulations in the Supplemental Generic Environmental Impact Statement (SGEIS), the conditions under which New York State proposes to regulate fracking, may be better than what they have in Colorado, history tells us they are unlikely to address a weather calamity like the Colorado flooding.

During the last eight years, we have had unprecedented flooding in the Catskills, with several storms considered ‘500-year’ floods. However the SGEIS only seeks to prohibit wells in areas that are defined as 100-year flood plains.  This flood plain definition has been rendered almost meaningless as climate change has created a “new normal” where we are seeing the increased frequency and intensity of weather events that previously were defined as 100 year, 500 year and even 1000 year occurrences.

Flooding could impact and compound the problems of fracking in many ways including:

*Fracking wastewater not only contains the toxic and hazardous chemicals used in fracking fluid but also contains contaminants that it picks up from deep within the earth, most notably salty brine and radioactive materials.

Even if the proposed regulations were more stringent, our government does not have the ability or willingness to enforce the regulations they do have. A recent study showed that the Department of Environmental Conservation has lost one third of its staff.

Ironically, it is the carbon emissions from burning natural gas and other fossil fuels that are accelerating climate change, which in turn is increasing the intensity of storms like the one that caused the flooding in Colorado and could easily cause more floods here in New York.

The potential for well sites, drilling infrastructure and holding ponds to flood is an unacceptable risk.  This is one more reason why based on extensive study and scientific evidence, Catskill Mountainkeeper has called for a ban on fracking.  We are also working within the existing regulatory process in New York to raise critical issues, widen the discussion of the impacts of drilling, and expand the options available to protect the public.