Drilling in the Catskill Park

The New York State Forest Preserve was established in 1895, and nine years later our legislators created the Catskill Park to protect this unique and special wilderness region.  It was their intention to have it protected in its wilderness state forever.  Gas drilling within the blue line breaks that promise, puts this special area at great risk and does not acknowledge that private property within the blue line is different than private property elsewhere.

The idea behind creating the blue line was that any private land within the blue line could at some point be purchased by the state and become public land.  While commercial operations are allowed, such as logging, stores, resorts, etc. they are not permanent changes to the land and the land they are on has the capacity to grow back.  Any commercial ventures to date have been required to go through a local regulatory process.

However, if fracking is allowed in any part of the Catskill Park, all of these precedents will be broken.  Not only will drillers not be required to go through the local regulatory process, but the changes they make to the land will be permanent.

The Catskill Park consists of 700,000 acres of land inside a blue line in four counties: Delaware, Greene, Sullivan and Ulster.  Of that, 41 percent is owned by the state as part of the Forest Preserve.  Another 5% is owned by New York City to protect four of the city’s reservoirs that lie partially within the park and their respective watersheds.  The lands that are state owned are protected from gas drilling by Section 1. of Article XIV of the New York State Constitution which states, “The lands of the state, now owned or hereafter acquired, constituting the forest preserve as now fixed by law, shall be forever kept as wild forest  lands.  They shall not be leased, sold or exchanged, or be taken by any corporation, public or private, nor shall the timber thereon be sold, removed or destroyed.”

All of the land within the blue line must have the same protection.

The Catskill Park is one of only 10 areas in the eastern half of the United States that has wilderness of over 50,000 acres.  It provides access to a wilderness experience for over 20,000,000 people who live within 100 miles of it.  This includes hiking, mountaineering, tubing, fishing, camping, snowmobiling, skiing and more.  The state operates numerous campgrounds and there are over 300 miles of multi-use trails.

The Catskill Park contains the headwaters of some of the cleanest rivers in our State.  It has a myriad of endangered species and habitats. Industrialization from natural gas drilling of the private lands within the Park would impact the public lands in the following ways: 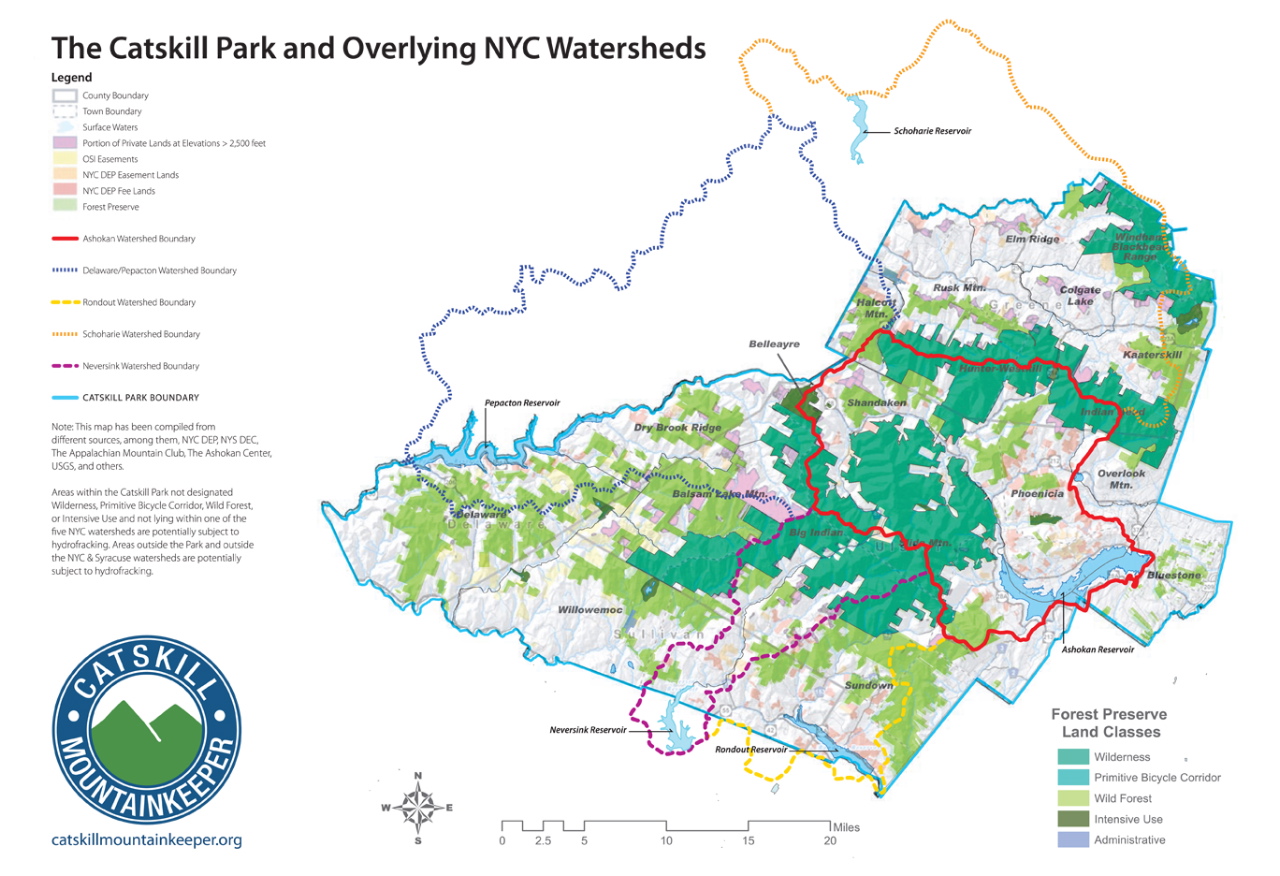 Water would be drawn to service the gas drilling wells from lakes, rivers and streams that are on both public and private land.  Each well uses between 3 million to 5 million gallons of water.  How much is 3.5 million gallons? The City of Ithaca draws 3.27 million gallons per day from Six Mile Creek to supply over 35,000 customers, and Bolton Point took about 2.93 million gallons from Cayuga Lake each day in 2007 to service 30,000 residents.

The toxic chemicals that are used in hydrofracking would get into the aquifers within the blue line, under both private and public lands.  Ralph Heath, a respected USGS geologist, is quoted on the DEC website as saying: “…..In most places ground water occurs in and moves through an intricate network of very small openings. Remarkably few wells drilling in New York fail to penetrate at least a few of these openings.”

The trucks that service the wells, bringing water and chemicals to the site and taking wastewater and gas from the site would damage all of the roads within the blue line.

The accidential spills, leaks and seepage of contaminates, as have been seen in places like Dimrock, PA, would not differentiate between public and private land, lakes and streams.  Since gas companies have little control over exactly where fractures will develop, the fracking fluids and gas might move in unexpected directions, ending up in aquifers and water wells.

Since nearly every individual gas well would eventually connect to larger pipelines through smaller pipelines, a massive network of pipes would be formed that would limit the migration of animals within all of the blue line.  Animals do not abide by the boundaries of public and private lands.

Animals would be attracted to the salts in toxic wastewater that would be stored in open, plastic-lined lagoons and would be poisoned when they drank it.

The drilling, hydrofracking and processes that extract the gas, dump dangerous chemicals into the air.  The air quality of all the lands within the blue line would be equally affected.

The sounds of drilling a gas well have been equated with the sound of jet engines taking off.  When wells are being drilled klieg lights illuminate the drill head 24 hours a day.  When wells are drilled, the trees are taken down and the land is leveled.   This of course would affect the public lands that would be adjacent to the private drilling sites.  The Park Master Plan stipulates that as much land as possible be left “untrammeled by man” and as close to its natural state as possible, offering outstanding opportunities for solitude.  It is hard to image anything that is more contrary to this than the reality of gas drills in production.

The people of New York State and the Catskill region are very fortunate to have benefited from over a century of public land acquisition by the State government. Our open space resources and outdoor recreation opportunities are greatly enhanced by the thousands of acres, which have been protected and are open to the public. Allowing gas drilling within the blue line would turn the Catskill Park into an industrial area and break the covenant established over 100 years ago to maintain this area as a pristine, wild and natural place.  We must preserve this land for our people and future generations.

The reasons why hydraulic fracturing should be banned within the blue line of the Catskill Park are the same reasons why hydraulic fracturing should not be allowed in all of New York State.  That is why based on extensive study and scientific evidence, Catskill Mountainkeeper has called for a ban on fracking in all of New York State. We are also working within the existing regulatory process in New York to raise critical issues, widen the discussion of the impacts of drilling, and expand the options available to protect the public.