Air pollution that is a byproduct of gas drilling operations is a threat to our health and our environment. It makes people sick and it sends methane, a potent greenhouse gas, into the atmosphere. 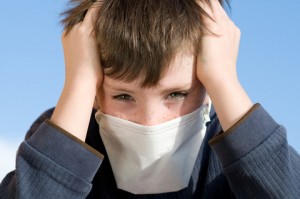 Air Pollution – a threat to the environment

Natural gas, which is made up primarily of methane, has about 20 times the impact on global climate change than carbon dioxide over a 100-year period, according to the government.  A prime source of methane emissions is leakage from the natural gas supply chain, including wells, processing, pipelines and local distribution. The release of methane utterly vitiates any climate benefit of natural gas, even when used as an alternative to coal.

This has been confirmed by study after study.

A study by researchers from the National Oceanic and Atmospheric Administration (NOAA) in late 2012 reconfirmed earlier findings of high rates of methane leakage from natural gas fields.

But a recent study published in the Proceedings of the National Academy of Sciences found that the Environmental Protection Agency (EPA) is significantly underestimating the amount of methane that natural gas drilling operations emit.  Scientists monitored methane emissions at several drilling sites in southwestern Pennsylvania in June 2012. They found that methane emissions at the sites were 100 to 1,000 times greater than the EPA's estimate of how much methane the sites emit per second.

Air Pollution – a threat to our health

Gas drilling operations release many types of airborne contaminants that can have detrimental effects on our health.  Areas where there is gas production have reported significant increases in ozone, commonly known as smog, because some of the toxic precursors to smog, such as volatile organic compounds and nitrogen oxides are released during the process that brings natural gas from the ground to market.

Lisa Jackson, former Administrator of the U.S. Environmental Protection Agency (EPA) admitted in an interview with National Public Radios’ Michele Norris at the Aspen Ideas Festival in June 2011, “You are going to have huge smog problems where you never had them before…these are rural areas. … there is a lot of

activity around those wells and that has an impact on air quality — and we know it already.”

Out West where they have been drilling for natural gas for years, ozone levels in many rural areas have gradually increased, with the highest readings being recorded in the most recent years. Formerly pristine areas of Wyoming’s gas drilling area have recorded ozone levels that are higher than Los Angeles on its worst days. The Associated Press has reported that residents who live near gas fields often complain of watery eyes, bloody noses and shortness of breath.

It has been clear that high levels of ozone have been shown to have a direct correlation to an increase in asthma, and in some areas of Texas where they have been drilling for years, asthma rates in children have jumped from 7% to 25%, and a study released on June 25, 2012 found that ozone pollution appears to also cause potentially dangerous changes in the heart, leading to heart attacks.

Smog is primarily concentrated in areas closest to gas production activity, however, because smog travels via air currants, it can affect communities within a radius of many miles.

Ozone isn’t the only threat to health.  There are many other toxic compounds that are released during the gas drilling process that have potentially serious effects on health. They include:

BTEX compounds (benzene, toluene, ethylbenzene, and xylene) are volatile organic compounds (VOCs) – (organic chemical compounds that are highly evaporative and can produce noxious fumes). Benzene is a known carcinogen and has also been shown to cause blood disorders.  Both benzene and toluene can affect the reproductive and central nervous systems.  Ethylbenzene and xylene can have respiratory and neurological effects.

Carbon monoxide (CO is poisonous if inhaled because it inhibits the blood’s ability to carry oxygen and can cause dizziness, unconsciousness and even death.

Hydrogen sulfide (H2S) is lethal if inhaled at high concentrations and has a characteristic rotten egg odor at low concentrations.

Nitrogen Oxides (NOx) are formed during flaring and when fuel is burned to power machinery for heavy equipment and at compressor stations.  They form smog when they react with volatile organize compounds. Health impacts include respiratory problems, heart conditions and lung damage.

Sulfur dioxide (SO2), which can be emitted during flaring or when gas is burned, reacts with other chemicals to form particulate pollution (the suspension in air of dust or soil) during well construction, or from diesel exhaust and engines. It can damage lungs, cause respiratory illness, heart conditions and premature death.

Methane – in addition to its heat trapping effect on our atmosphere, it can cause oxygen deprivation and can act as an aspphyxiant at high concentrations. In addition, methane is flammable and highly explosive. Natural gas frequently contains other hydrocarbons such as ethane, propane, butane, and pentanes as well as benzene, toluene, ethylbenzene, xylenes and hexanes, hydrogen sulfide (H2S), and carbon dioxide.

There has been insufficient study of air pollution’s health effects

One of the travesties of Governor Cuomo’s push for natural gas exploration in New York State is that no health impact study has been done to assess the impact of fracking on the health of New Yorkers. This follows a pattern throughout the United States of drilling first and then suffering the consequences later.  One of the only documents that we were able to find that studied the health impact of gas drilling was a health impact assessment done by Garfield County, CO at the request of the residents of Battlement Mesa, CO.

This assessment concluded that air pollution will likely “be high enough to cause short-term and long-term disease, especially for residents living near wells. Health effects may include respiratory disease, neurological problems, birth defects and cancer.”

It says, “Natural gas development and production operations and the diesel engines used to support them have the potential to release many hydrocarbons, carbonyls, and other contaminants into the air. People can be exposed to these contaminants as they breathe ambient air in and outside of their homes. Some of these contaminants, such as benzene, diesel exhaust, and PM2.5, are human carcinogens. Others, such as carbonyls, alkanes, ground-level ozone, and 1,2,4- trimethylbenzene, can act as irritants of the eyes, skin, and respiratory tract or cause neurological effects.

In addition, hydrocarbons, carbonyls, and nitrogen oxides serve as precursors for ground level ozone formation…In addition to the effects that each of these substances can produce by itself, there is also the possibility of complex health reactions occurring as a result of the interaction of multiple substances. The current state of the science is limited in ability to assess exposures to these complex mixtures of air toxics, especially, synergistic and antagonistic interactions at low levels. Preliminary studies that indicate complex mixtures can act additively or synergistically to increase effects on human health. For example, studies of healthy adults indicate that continuous exposure to sulfur dioxide or nitrogen dioxide increases ozone absorption. Studies of asthmatics suggest that ozone enhances response to allergen challenge. Other studies have reported injury to lungs with exposure to the combination of ozone and PM is larger than when exposed to either alone.”

Air pollutants are released at all phases of gas drilling operations

At every stage of gas operations there is the possibility of unintentional gas leaks, which are called fugitive emissions.  Fugitive emissions result from small cracks or breaks in seals, tubing, values or pipelines, or from improperly closed or tightened lids or caps on equipment or tanks.  Fugitive emissions release the methane that is the primary component of natural gas plus other volatile organic compounds (VOCs), and numerous additional contaminants that are in the gas. These emissions are not visible to the human eye and without an infrared camera no one would suspect that plumes of toxins were escaping into the atmosphere.

Venting releases gas into the atmosphere during well, pipeline and tank maintenance and when the well is cleaned after fracking operations are complete. 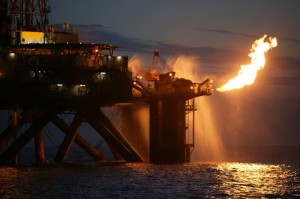 Flaring burns gas that is a safety hazard or uneconomical to collect and sell. Flaring emits a host of air pollutants, which vary depending on the chemical composition of the gas and fracking fluids.  When a well is “flared” huge flames jump into the sky and are accompanied by noise that is comparable to a jet engine. The resulting light and noise are so powerful that they can cause sleep deprivation.

Heavy construction activity goes along with setting up and maintaining well sites; it generates particulate matter and stirs up dust, which reacts with volatile organic compounds to increase ground-level concentrations of ozone and create dense smog.

Polluted air is not just a problem in the areas where drilling takes place, but also affects communities that are located along the gas pipelines that bring gas to market. To keep natural gas in a highly pressurized state for travel through pipelines, compressor stations are located every 40 to 100 miles along the route. Four compressor stations are now planned for Minisink in Orange County, NY.

Compressor stations have been documented to cause many environmental problems including air, water and noise pollution, plus soil contamination.  The residents of Dish, TX started to have health problems after 11 compressor stations were built.  When then Mayor Calvin Tillman couldn’t get the Texas authorities to investigate why people in his town were getting sick, he hired a private environmental consultant to help him figure out what was going on.  The air study showed extremely high levels of both carcinogens and neurotoxins.

Ultimately the top toxicologist at the Texas Commissionon Environmental Quality expressed concern that the presence of benzene, a potentially cancer-causing toxin detected near the compressors, could pose long-term health risks. In addition, Dish residents  experienced ruptured eardrums, which came from the constant low frequency roar of the compressors. Ultimately Mayor Tillman decided to leave his job and move his family away because he said, “I just couldn’t risk the health of my children to stay here.  I guess you could say that was the choice I felt I had to make.  That’s not a very difficult choice.  My family is the important thing to me.” To hear an interview done in 2009 with Mayor Tillman by John Burnett of NPR, click here.