Yellow-lettered signs could go by the wayside 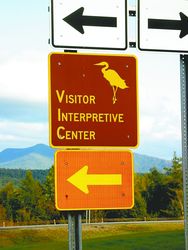 They've been a fixture along the highways and byways of the Adirondack Park for years - yellow and brown signs that identify the town of village you're entering, the lake you're driving by and where to find nearby shops, lodging, food and attractions.

But the days of yellow lettering may be numbered.

The Federal Highway Administration (FHWA) is asking the state Department of Transportation to consider replacing the yellow-on-brown signs, which are only found in the Adirondack and Catskill parks, with white-on-brown signs like those found in national parks.

The potential change has some people upset that the Adirondacks could lose what's considered its trademark colors.

"The Adirondack Park has been protected for over a century, and part of that identity has been the commitment from the state to brand the park in a unique fashion," said Dan Plumley of the environmental group Protect the Adirondacks! "Part of that branding has been the brown and yellow signs that are omnipresent throughout the Adirondacks. We intend to urge that no changes take place to that standard."

The proposal will be discussed by officials from the FHWA, state DOT, state Adirondack Park Agency, environmentalists, local government officials and other stakeholders at an Oct. 1 meeting in Albany.

While no decisions have been made yet, FHWA spokesman Doug Hecox said there are safety issues associated with yellow-on-brown signs. He said tests have shown that white-on-brown signs, like those found in national parks, can be more easily seen at night or in low-light situations when compared to signs with yellow lettering.

"Safety is our top priority, and we want to make sure that New York motorists are as safe in the parks as they are on any other road," Hecox said.

Matching signs in the Adirondacks to those in other parks across the country would also create consistency, Hecox said.

The standards for road signs across the country are spelled out in a document called the Manual on Uniform Traffic Control Devices, which is published by the FHWA. It includes a provision that requires informational or guidance signs in parks or recreation areas to use a white font and border on a brown background.

But since the 1970s, the Adirondacks and Catskills have received a waiver from those standards to use yellow and brown signs, according to Michael Shamma, director of Utica-based DOT Region 2.

"The Adirondack Park predates any of the national parks, and that's why FHWA granted the exception at the time," he said. "But every few years the manual gets updated and there's a dialogue about consistency and conformance."

While federal officials cited safety issues as one reason for changing the color scheme of the signs in the Adirondacks, Shamma said the state DOT doesn't have those concerns.

"We don't see a safety issue with yellow on brown versus white on brown," he said.

If a change is made, Shamma said the Park's signs wouldn't all be replaced at once.

"We have a normal replacement cycle," he said. "If a decision is reached with all parties involved that the color scheme will change, as you replace these signs over 10 to 12 years, you'd replace them with the agreed-upon solution."

But some people are hoping it doesn't get that far.

"The Adirondacks are not a national park," Plumley said. "It's a state park that's very unique. And we should identify our park uniquely and distinctly from our national parks."

Plumley noted the Adirondacks recently lost another "branding attribute" when the state decided to use federal stimulus funds this summer to remove the rusted, brown, "rustic" guiderails in the Adirondacks and replace them with silver, galvanized-steel guiderails.

"This is just another hit," Plumley said.

State officials have said the rustic guiderails were treated with an alloy that caused them to rust much quicker, creating safety concerns.

"Once the department determined the rustic guiderails were deteriorating, we couldn't really tell whether they were going to hold back a vehicle on the road," Shamma said. "The signs is really not a safety issue; it's strictly a conformance and consistency issue."

Brian Towers, president of the Adirondack Association of Towns and Villages, said he understands the concern that a change in signage could affect the "branding" of the Adirondacks, but he doesn't think it's worth fighting over.

"If the biggest problem we've got in the Adirondacks is whether the letters on the signs or white or yellow, some people have a real problem," he said. "We've got much bigger problems."

The Oct. 1 meeting is designed to open up a dialogue among the various agencies and groups who have an interest in the Park's signage.

"We all have an interest in conformance, highway safety and preserving the culture and heritage of the Adirondacks," Shamma said. "I'm pretty confident we can reach a solution that's acceptable to everybody."