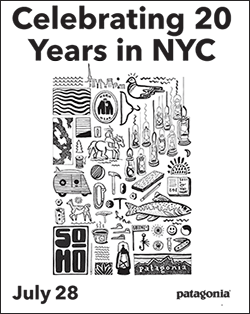 fundraiser for Catskill Mountainkeeper. Every dollar raised will be used to fund our work to break free from fossil fuels and move to renewable energy. I hope you can come and have a beer with me.

The anniversary bash will take place at Patagonia’s Soho store at 72 Greene Street, Manhattan on Tuesday, July 28th. The party will begin at 7:30 pm and feature free craft beer and food, a surprise live band performance, games, art, giveaways, a raffle and more.

Patagonia is generously donating all the proceeds from the evening to benefit Mountainkeeper's work.  And we hope you and other Catskill Mountainkeeper supporters can be there to show Patagonia how much we appreciate its long-time partnership in our work.

Mountainkeeper's program director Wes Gillingham and other members of our team will be joining me. So come meet us in Soho for what’s going to be a great evening.

PS The event is free (Patagonia will be collecting a $5 suggested-only donation to benefit Mountainkeeper at the door) but you must RSVP at [email protected]
WHEN
July 28, 2015 at 7:30pm - 11:30pm
WHERE
Patagonia’s Soho store
72 Greene St
Manhattan, NY 10012
United States
Google map and directions