Welcome to this week's installment of Undiscovered New York. This week we're going to be heading north, following the path of the Hudson River, one of the great waterways of the Northeastern United States. Many New Yorkers will tell your our city is "the center of the world," and in some ways, they have a good case. But the land bordering the Hudson River up to the capital in Albany has been just as important in shaping New York as the city itself in matters historical, political and cultural.

Along the shores of this picturesque valley lie all sorts of fascinating destinations which have shaped New York City, the United States and arguably the world. The Hudson River Valley is home to the mansions of former Presidents and wealthy industrialists, famous enclaves of artists and culinary experts and birthplace of one of our nation's great military schools.

Are you ready to leave the confines of New York City? Come along with Undiscovered New York as we "head up the Hudson." 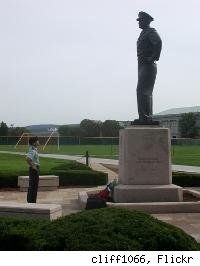 Stop One: West Point Military Academy
Just fifty miles up the Hudson from New York is West Point, site of the oldest continuously occupied military post in the United States and home to around 4,000 cadets. Though the academy was first established by President Thomas Jefferson in 1802, the site was founded as a military installation in 1778, when it helped deter British troop movements along the river during the Revolutionary War. Visitors who are interested in checking out the grounds can stop by the Visitor's Center where they can arrange guided tours. There's also one of the world's biggest military museums on site, providing a interesting look at the history of U.S. military.

Stop Two: Storm King Art Center
Next on our tour of the Hudson, is Storm King, an outdoor sculpture gallery set against the backdrop of scenic Mountainville, NY. Nestled among over 500 acres of gorgeous rolling hills are enormous sculptures crafted from famous artists like Alexander Calder and Richard Serra. It's a peaceful place to spend the day strolling the grounds or to bring along a picnic and enjoy the outdoors (OK, yes winter is coming, but you never know with global warming these days).

Stop Three: Hyde Park
As we move further up the Hudson, we arrive at Hyde Park, a historic New York town that dates back to the 18th Century. It's famous for several great attractions, all within close proximity. Perhaps most renowned is the former home of Franklin D. Roosevelt, who was born in Hyde Park and spent many years living there during his time as President. In addition to tours inside Roosevelt's home, visitors can also take a look at FDR's Presidential Library with many artifacts from the momentous years of the Great Depression and World War II. Also nearby is the Vanderbilt Mansion, one of the family's many opulent retreats and a monument to Gilded Age excess. Foodies should also make a stop at the Culinary Institute of America, where they can sample world class cuisine from the school's chefs in training.

Stop Four: Woodstock and the Catskills
What trip up the Hudson would be complete without a stop in Woodstock, notorious home of the world's best known music festival and long time hippie enclave? If schlocky tie-dyed t-shirts are not your thing, don't despair - there are plenty of awesome attractions nearby that will make the trip more than worth it. Nature lovers will be pleased to find the Catskills are just minutes away. It's a gorgeous unspoiled wilderness where you can take in the scenery and perhaps check out the Buddhist Monastery that sits at the top of one of the area's many hills. Make sure to finish your day at The Bear Cafe - the food is absolutely outstanding.