Doctors Call for a Halt to Fracking!

Catskill Mountainkeeper is pleased to announce the publication of the 4thEdition of the "Updated Compendium of the Health Impacts of Fracking”, an exhaustive compilation of scientific, medical, and media findings documenting the many serious risks posed by fracking to our health, air and water, and our climate. 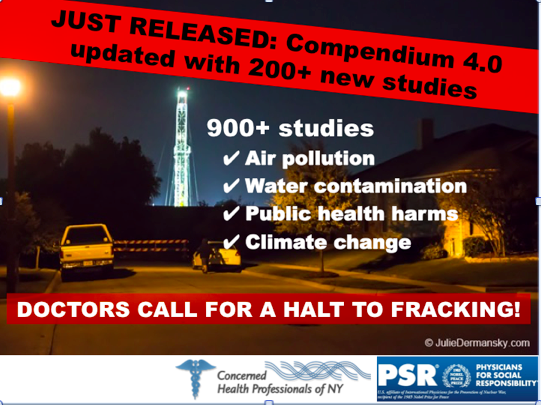 Produced by Concerned Health Professionals of New York (CHPNY) and Physicians for Social Responsibility (PSR)—in close collaboration with Mountainkeeper’s Research Director Kathleen Nolan, MD—the Compendium is an essential source of information about the dangers of the fracking process from wellhead to distribution.

The first edition was critical in Mountainkeeper’s campaign to shine a light on the health impacts of fracking during the fight to secure New York State’s historic fracking ban, and we have continued to help update and distribute the Compendium to serve as an extremely valuable tool for people fighting fracking and all forms of extreme energy extraction in other states and internationally.

The 4th edition has an expanded focus on the dangers of fracking infrastructure—like pipelines, compressor stations and storage facilities—and addresses the issue in the context of the Paris Climate Agreement, providing evidence of how fracking-related methane leaks and emissions significantly exacerbate climate change.

An important new section examines fracking as an environmental justice issue that disproportionately impacts low-income people and communities of color, and lists municipalities, counties, provinces, states, and nations around the world that have already banned fracking.

When the Compendium’s first edition was put together several years ago to help inform the New York State fracking debate, the existing peer-reviewed scientific literature included only 60 studies on fracking.  Now there are over 900 studies (with 200 peer-reviewed studies on fracking published so far just this year), adding more scientific heft to the fight in other fracking hot spots.

Designed to be accessible to public officials, researchers, journalists, and the general public at large, the Compendium helps people get their arms around the substantial amount of information about fracking’s health and safety risks, as well as the economic realities framing these issues.

The Compendium continues to be an important tool in Mountainkeeper’s work to fight the massive build-out of fossil fuel infrastructure in New York State, demonstrate the need to break the cycle of our dependence on dirty and dangerous fossil fuels, and lead the way to a healthier and safer future for us all.  In all of this work, we stand firmly behind PSR’s position that “we cannot stay healthy in an unhealthy environment. Nor can we survive indefinitely on a planet growing hotter and more prone to extreme, unpredictable and destructive weather….”

We hope that you will consider making a gift to support this work and help Mountainkeeper continue the essential fight to protect our families and communities.