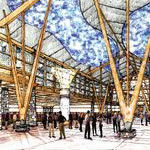 The project, like most other big development efforts, has had a tough time securing the full financing necessary for build out. The gaming resort operator and its developer, Cappelli Enterprises, announced this week that its joint venture partner, Concord Associates LP, received approval from the Thompson (NY) Planning Board to build its Concord-Empire Hotel and Casino project in phases rather than all at once.

Under the amended site plan, Empire would build a 500-room resort hotel, casino, spa and racetrack during the first phase, now expected to occur "within the next 18 to 24 months," the company said in a release. The original proposal called for a 750-room hotel, with the project to be started this spring.

Future phases would include construction of ballrooms, a 1,000-seat theater, a 7,500-seat multi-purpose entertainment center and up to 4,000 spaces in two parking garages.
'relatedarticles'
Do you like this post?
Tweet