The quest for riches in the Marcellus Shale Formation is off to a rocky start -- at least in parts of northern Pennsylvania. 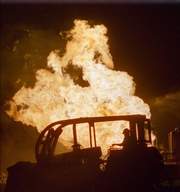 There, companies drilling into the massive natural gas resource have drained streams and spilled diesel fuel on pristine countryside.

Drill operators working for Range Resources and Chief Oil & Gas last month illegally diverted tens of thousands of gallons of water a day from rural streams to large-scale drilling operations in Lycoming County, west of Scranton, according to a report form the state Department of Environmental Protection. The DEP partially shut down the operation.

"We hope to have it resolved soon," Kristi Gittins, vice president for Chief Oil & Gas said Friday. "We fully comply with all regulations."

(An unidentified bulldozer operator is silhouetted against the flame of a natural gas well near Dime Box, Texas. The risks of gas drilling include noise, dust, spills and even explosions.)
(The Associated Press)

And in Susquehanna County, about 800 gallons of diesel fuel -- dyed bright red to help track it in the event of a spill -- leaked from a storage tank at a Cabot Oil drilling site, threatening a nearby stream. Emergency responders were containing and cleaning the mess last week.

For local property owners giddy about the prospects of their own lucrative land deals, it has been a sobering vision to see heavy equipment diverting stream beds and bright red diesel fuel flowing through ditches.

Yet the allure of staggering riches has many landowners lining up to cash in. In Broome and western Delaware counties, hundreds of landowners recently signed five-year leases with energy companies, taking the current offer of $2,411 per acre for mineral rights, plus 15 percent royalties. Others are holding out for more.

They sign away their property, knowing that with the rewards come environmental and safety risks.

In rural Daisetta, Texas, last month, a stadium-sized sink hole opened up, swallowing everything in its path. Geologists suspect intensive drilling operations in the area triggered the massive implosion.

Spectacular explosions at gas-drilling sites, shooting churning orange and black fireballs into the air and leaving columns of soot visible for miles, are not unheard of. One blast near Fort Worth, Texas, in April 2006 killed a worker and forced evacuation of nearby homes. Another blast in 1996, near Dime Box, Texas, killed two workers.

Explosions and sink holes are extreme and uncommon examples of what can go wrong, according to regulators and independent experts interviewed for this report. But they do happen.

More routine problems include noise and dust from intensive around-the-clock operations, and risks to water sources on and under the ground.

Susan Obleski, spokeswoman for the Susquehanna River Basin Commission, said Friday the agency has received only a handful of permit applications from 23 companies actively pursuing gas in the Marcellus Shale in this region. The commission oversees water resources and consumption in New York, Maryland and Pennsylvania.

"One of the issues is there are so many companies, and there are a lot more coming, given the interest," she said.

Commission Director Paul Swartz cited "mounting concern over well-development practices in the Susquehanna watershed" on Friday as part of a public notice to the drilling industry to comply with permit requirements.

Extracting gas from the Marcellus Shale requires drilling horizontally through bedrock, sometimes for a mile, and forcing cracks open with high pressure blasts of water. Each well requires an average of 1 million gallons.

The process, called hydraulic fracturing -- or "frac'ing" -- requires resources and equipment on a scale far surpassing vertical wells traditionally drilled in the area. Drilling operations drawing on headwaters in the upper tributaries of the river "will suck them dry," Obleski said.

"We're seeing what is happening in northern Pennsylvania," he said. "We don't think the state is ready."

Industry sources characterize impacts from drilling operations as short term. While the development of infrastructure and well pads may be disruptive, the landscape is restored after drilling is completed.

"It's like a construction project," Gittins said. "When you finish building, you put your landscaping in and after that, things look good."

Downs co-authored this warning for the Atlantic Chapter of the Sierra Club, Natural Resources Defense Council, and Catskill Mountainkeeper: "Many citizens who entered into these agreements are unprepared for the five-acre staging areas, drilling fluid-collection ponds, reduced air quality, noise pollution, traffic, temporary road networks, and the pipelines that come with a hydraulic fracturing operation."

The warning, part of a broader statement lobbyists issued to state lawmakers, comes at a critical time, as legislation is introduced in the state Assembly that would effectively accelerate the permitting process.

"We are not opposed to natural gas drilling," Downs said. "But we want a comprehensive plan before wells go in."

Marchie Diffendorf, a Kirkwood landowner and member of the town planning board, said problems in Pennsylvania raise concerns locally. Landowners will have to be watchdogs over drilling operations on their land, and that begins with drafting lease agreements that give them control over important issues. He is confident the DEC will provide sufficient oversight of water resources and other operations, he said.

"I don't think the DEC will allow them to dam up any creeks," he said.

Because the Southern Tier's landscape and geology is different from Texas, sinkholes are not a threat over the Marcellus, said Terry Engelder, a professor of geosciences at Penn State.

However, the bedrock below the Southern Tier carries another kind of risk: radioactive ores.

Water extracted from a Marcellus well is typically contaminated with salt, metals and various agents used in the drilling process.

Additionally, it sometimes carries traces of radioactivity picked up from uranium and thorium. It's the same kind of geology that creates radon, which can become a cancer risk when it collects in basements.

Engelder said concentrations from drilling and frac'ing are typically so low he wouldn't be afraid to dive into a pool of contaminated water.

Brad Field, director of mineral resources for the state Department of Environmental Conservation, said certain conditions could lead to pockets of dirt or water with elevated concentrations. That means drilling sites will be subject to tests for radioactivity, at the discretion of DEC officials.

Because the exploration and development of the Marcellus is in its infancy, supplying and disposing of water is not yet an issue in New York, Field said. That could change with a potential explosion of the number of drilling sites attempting to harvest the largest untapped natural gas resource in the country.

After water used in the drilling process is pumped from the ground, it has to be trucked away and treated. Municipal planners will have to be ready for the possibility of significant burdens on wastewater treatment plants.

"With the full development of the (Marcellus) resource, it could be an issue," Field said.

Additionally, if proper precautions are neglected to encase well shafts, drinking wells can be contaminated from turbid or salty water pushing up from deeper layers. Regulators will be kept busy as more wells begin to come on line in eastern Broome County.

Planners also can expect an influx of traffic by trucks and rigs far exceeding current weight limits of town and country roads.

The development of the Marcellus, called a play, has been moving north from the heart of Appalachia with increasing momentum, pushed by the relentless demand for energy and rocketing prices.

The Pennsylvania Department of Environmental Protection is hiring and training staff to help monitor a growing number of drilling sites, said Mark Carmen, public information officer for the DEP. Environmental issues in Pennsylvania and areas south, where drilling efforts are intensifying, are leading to questions about how prepared New York is to handle the impact on roads, water treatment and production, noise and unforeseen problems.

Bonnie and Don Beagel, of Kirkwood, have some experience in the unforeseen-problem department. They leased their land off Old State Road to Triana Energy in 2002. After developing a horizontal gas well there, Triana sold it to Chesapeake. The Beagels thought their headaches were over when the drilling stopped and the well was capped in 2003.

The quiet didn't last long. Chesapeake is now redeveloping the well in an attempt to tap the Marcellus.

"We didn't know they could do that," she said.

The noise of heavy equipment pounding the earth, clouds of dust settling over their house and swimming pool, and loss of control of their property are too much, Bonnie said.

"It's been frustrating," she said. "We would be happy to give it all back and go back the way it was before they came ... It used to be our private back yard. Now, there is always truck activities and men down there. I miss my privacy."

Town officials seem to be helpless in controlling booming noises coming from the site day and night. After a string of sleepless nights, Beagel complained to the operators, she said, and was told this:

"I know your neighbors aren't happy with us, ma'am. One came out of the woods at 2 o'clock last night swearing. But my orders are to keep this operation going."