On an Upstate Wind Turbine Project, Opinions as Varied as the Weather 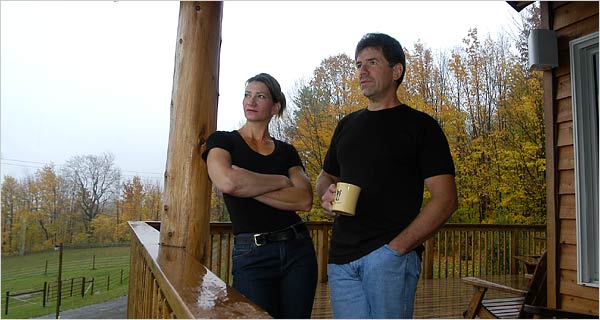 Floyd Many, now 81, grew up in the rolling hills of Delaware County in the Catskills. He has served on the town board for the past 25 years.

But when asked about anything comparable to the disputes that are pitting neighbor against neighbor and prompting stern warnings about the importance of remaining civil before public meetings, he draws a blank.

As we stumble toward what’s supposed to be a greener future, almost everyone, in the abstract, is for wind energy, surely as green, safe and abundant an energy source as there is. But, as residents of Long Island saw last summer in a proposal for wind turbines off Jones Beach that was quickly deep-sixed, it’s often not so simple at all.

So on the road from Grand Gorge to Stamford you see the yard signs popping up in front of barns and houses — “Yes to Clean Energy” on some, “No Industrial Wind Turbines” or “Save Our Mountains” on others.

It’s a long way from the hellish fires in Southern California or the scary drought in the Southeast to the Catskills. But for those contemplating the issues of climate change and the roadway to greener energy, it’s not so far away at all. Whatever role climate change may be playing right now, it’s clear that even something so elemental as the wind is as subject to the vagaries of politics, self-interest and community dynamics as anything else.

“I will say this just once: not in my backyard,” Mr. Many said, when asked to characterize the discord. “People in Delaware County think it ought to be in the Adirondacks. People in the Adirondacks think it should be in the ocean off Massachusetts. Teddy Kennedy thinks it should be somewhere else. Everyone wants alternative energy, but no one wants it where they have to look at it.”

The proposal here, by Chicago-based Invenergy LLC, calls for a wind farm with 33 turbines, each 410 feet fall, along six miles of the Moresville Ridge between Stamford and Grand Gorge. The company says the project eventually could produce 260 million kilowatt hours a year, or roughly enough to supply 43,000 homes.

People support it for various reasons. Some landowners will make money by allowing the turbines to be put on their property. Some prefer turbines on farms to farms being sold off for subdivisions. Some think that it’s an issue of property rights and that landowners should get paid for turbines on their land if that is what they want. Some think the town and neighboring Roxbury, which is further along in the permitting process, will benefit from fees paid by the company. Some even think the project should be built because it’s the right thing to do.

“I personally believe that the country is at or near an energy crisis, we’re doing nothing to take care of it at a national level and people at some point have to step up and face it,” said Mike Triolo, a town board member now running for supervisor. “We don’t live in a micro society. We have macro problems that affect us all.”

People oppose it for various reasons, too. They hate the thought of giant turbines marring the primal Catskill vistas. They see wind as a new energy rip-off dependent on federal subsidies. They think turbines create noise and annoying flickers of light. They think the company won’t pay enough to the town, that the turbines could cause fires that would be difficult to control, that they will kill birds and bats. They say it will hurt property values, that they don’t want it in their “viewscape” or in their backyards.

Ken and Kelly Haas are retired New York City police officers. They moved to the mountains full time three years ago and now face the prospect of living at the base of a ridge with the turbines on top. They cite all those reasons and more. They don’t want to sound unpatriotic. They don’t think of themselves as kneejerk Nimby’s. They just say the more you learn about the turbines, the more there is not to like. “The more you learn, the more you see this is all about big business making money,” Mr. Haas said.

Mrs. Haas said there would soon be better alternatives: “You think back a couple of years, people carried those big boomboxes. Then it was Walkmans, now it’s an iPod. Things got smaller and more efficient down the road. This particular wind turbine is not going to solve all the problems of the world.”

Wind accounts for just 1 percent of the country’s electricity use. President Bush has said it could reach 20 percent. Maybe we can get there by putting it all way out in the Texas Panhandle or the Great Plains. Maybe there will be many, many magic marvels in the years to come: microturbines and benign marvels of solar or geothermal energy, energy from ocean waves and tides. Maybe there’s a micro solution to this macro problem with no pain and no sacrifice for anyone.

And then, maybe not.