Woodstock Museum Calls Aquarians (but Not McCain) Back to Farm 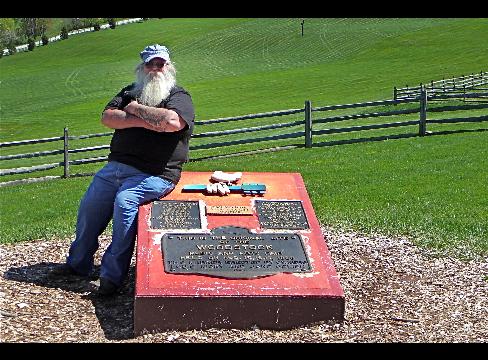 May 28 (Bloomberg) -- It's been years since Duke Devlin traded the hog he rode into Bethel for the electric golf cart that gets his creaky body around the world's most famous alfalfa field.

Devlin, his thick arms adorned with Harley-Davidson tattoos, his once blond beard and pony tail now snow white, looks out across the verdant, rolling hills of New York's Sullivan County on a cloudless May afternoon and mutters, possibly not for the first time, ``Yes, this is God's country.''

Which is literally true: The name of this town in the southwest corner of the Catskill Mountains translates from the Hebrew as ``God's house.''

It meant something not so different to the hordes who motored up the New York State Thruway and jammed Route 17B in August 1969 for the Woodstock Music and Arts Fair, three rain- soaked days and nights of ``peace, love and music'' that tattooed a generation.

Now they have, to quote Joni Mitchell, who wrote the definitive song about Woodstock, paved Paradise and put up a parking lot. Also a music shed and, opening next week, a state- of-the-art museum with de rigueur interactive exhibits, a psychedelic bus and, of course, a gift shop.

Devlin, 65, made his way to the ``Aquarian Exposition'' from Amarillo, Texas -- and never left. His business card at the $100 million Bethel Woods Center for the Arts reads ``Site Interpreter.''

Not that I need much help: On this acreage I, waterlogged and pharmaceutically enhanced, celebrated my 17th birthday. I was here, listening to Richie Havens improvise the song ``Freedom'' before the opening-day crowd that soon would swell to ``half a million strong,'' as Mitchell sang it.

Even back then, Sullivan County, the schmaltzy heart of the Borscht Belt, with its kosher resorts and striving nightclub comics, was in eclipse. In the late '90s, Alan Gerry, a local mogul-turned-philanthropist, saw the Woodstock legacy as the region's ticket to financial rehab. Gerry, now 79, had grown a TV repair shop in nearby Liberty into the country's eighth-largest cable TV company before selling to Time Warner Inc. for $2.7 billion.

Through his family foundation, Gerry quietly began buying up local parcels, scoring his biggest coup in July 1996, when he paid $1 million for the historic piece of Yasgur's farm. With the original organizers retaining rights to the Woodstock name, the site was dubbed Bethel Woods.

``The county has gone through a terrible recession period,'' Gerry said in an interview yesterday. ``Those resorts are essentially gone and the area has changed to second homes. What we have now is something to bring people to the area all year round.''

Gerry has committed $85 million to the project, with the state kicking in another $15 million or so. (When Senators Hillary Clinton and Charles Schumer tried to get the federal government to earmark $1 million toward the museum last fall, Senator John McCain seized on the ``hippie museum' as a boondoggle and the allotment was killed.)

The first part of the project, the music shed, opened two years ago, offering eclectic programming that runs from the New York Philharmonic to, coming up on June 21, Ringo Starr and His All Starr Band.

On June 2, the museum opens its doors. The region lacks first-class hotels and restaurants, making a visit problematic for the kind of upscale, big-spending patrons needed if Bethel Woods is to survive. But the venture has its charms, and Gerry cites a popular new brick-oven pizza parlor, Benji & Jake's, just up the road in White Lake, as one small indication of an uptick in confidence.

``This is not your grandmother's museum,'' said Mike Egan, a longtime Gerry lieutenant who is the museum's director. `` We've taken interpretive text panels, photographs of the period, film, interactive exhibits and objects from the period and meshed them together to tell the story of the '60 and of Woodstock.''

Egan leaves me to wander the freaky, ululating curves of the Woodstock permanent exhibition. The setup will be familiar to anyone who has visited the Rock and Roll Hall of Fame and Museum in Cleveland; the Bethel Center was designed by Westlake Reed Leskosky, whose partner, Dennis Barrie, did the Cleveland venue, in collaboration with Gallagher & Associates.

The hardwood structures feel tersely corporate; above one interior archway there's even the U.S. Marine Corps insignia -- a tribute to Gerry's service but strikingly out of place here.

You can watch films describing the advent of rock music, the British invasion, the clothes and art of the period. You can revisit the civil rights and antiwar movements on video and film; sit in a psychedelic bus, recall the Kennedy assassinations and the moon landing. Some 70 oral histories were commissioned and filmed by documentary filmmakers, and the ones I viewed were entertaining and informative about politics, culture and fashion.

At the end of the tour comes the coup de theatre, a 21- minute film of unreleased concert coverage from the festival that I found tighter and more compelling than the Woodstock film itself.

Duke urged me to look for myself in the movie and in the many photographs, but as I had managed to keep most of my soggy clothes on throughout the weekend, I apparently never caught a photographer's eye.

When I got home, however, I tracked down -- through the Internet, of course -- the girl who'd joined me on that birthday trip 39 years ago. It was partly nostalgia and partly to prove to my skeptical children, who are about the age I was then, that I had indeed been part of it all.

``No, I don't have any photos from Woodstock,'' she e-mailed back, ruefully. ``But please tell your kids: Yes it was real, and yes, you were there!''

The Bethel Woods Center for the Arts is a two-hour drive from Manhattan, at 200 Hurd Road, Bethel, New York. The museum opens to the public on June 2; reservations are strongly advised. Information: +1-866-781-2922; http://www.bethelwoodscenter.org.

(Jeremy Gerard is an editor for Bloomberg News. The opinions expressed are his own.)

To contact the writer on this story: Jeremy Gerard in New York at [email protected].