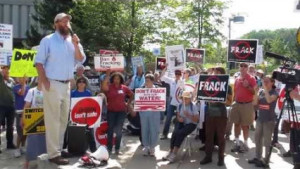 President Obama is coming to Cooperstown, NY this Thursday, May 22nd, and it's critical that we show up in force to rally against fracking! Lately, President Obama has been making headlines stressing the importance of addressing climate change. But his support for fracking completely undermines this message.  Not only does fracking cause widespread water contamination, dangerous air pollution, and terrible health and community impacts, but it is a major contributor to global warming. Tell Obama to ban fracking now!...

Fracking bans, like baseball, started in Cooperstown. The Village is located in the Township of Otsego, the first town to ban fracking in New York, and in the Town of Middlefield, one of the first towns to defend its fracking ban in court. The citizens of Cooperstown know fracking would destroy their thriving tourism industry, which has been a viable and sustainable economic force for the small towns and villages of upstate New York for well over a century. President Obama will be speaking at the Baseball Hall of Fame to promote tourism, but if he truly wants to support tourism in upstate New York, he needs to change his view on fracking. So join us from near and far to tell President Obama: no fracking way!

WHEN: Thursday, May 22, morning/mid-day - time to be announced as soon as we have it; check our Facebook page for updates

WHO: Concerned New Yorkers and organizations

Major Rally to Oppose Fracking at the Democratic Convention Are you closer to Long Island than to Cooperstown? Then join Catskill Mountainkeeper and New Yorkers Against Fracking at the New York State Democratic Convention, also this Thursday, May 22nd.  Bring your friends, family and fellow New Yorkers to urge Governor Cuomo to ban fracking.  The voices of his constituents are louder in person!  Show the governor that all eyes are still on him and his response to this important issue. The majority of New York Democrats and residents are opposed to fracking and are for a Health Impact Assessment. Fracking’s detrimental impact on the environment and people’s health has been documented in other states, but we are still waiting for a comprehensive Health Impact Assessment to fully understand the consequences of the new technology.  Come rally to be sure New York’s future is healthy and frack-free! WHAT:   Hundreds of New Yorkers rally to oppose fracking WHERE: Hilton Long Island, 598 Broad Hollow Road, Melville New York WHEN:  Thursday, May 22, 10 AM TRANSPORTATION: Bus from Manhattan, click here Rockland/Westchester, click here Hudson Valley, click here