We may be only days away from Spectra Energy’s high pressure, fracked-gas Algonquin Incremental Market (AIM) Pipeline going into operation. Mountainkeeper is working to stop the build out of all gas infrastructure projects because they will tie us to dirty fossil fuels at a time when we need to build a clean, renewable energy future. AIM is particularly egregious because as the pipeline spans three New York counties, it crosses two fault lines, passes only 105 feet from critical Indian Point Nuclear Power Plant Safety infrastructure, and travels just 400 feet from an elementary school. 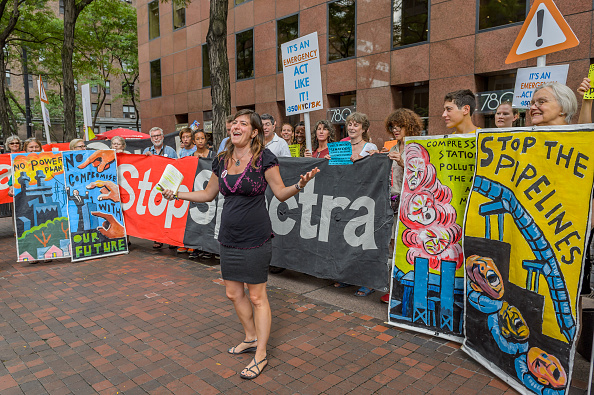 To make matters worse, Spectra Energy is putting the region at increased risk by deviating from the plan that was approved by the Federal Energy Regulatory Commission (FERC). The original proposal called for a 42-inch diameter pipe to run under the Hudson River, but because Spectra is having problems putting that pipe in place, and is under pressure from investors to get the pipeline up and running as soon as possible, the company is planning instead to use old pipelines (one 30-inch and two 24-inch) that already lay under the river to connect to the new 42-inch pipelines being laid on either shore.

Transferring gas from a 42-inch pipeline to 30- and 24-inch pipelines is an especially hazardous operation that will likely involve releasing large amounts of gas into the atmosphere on an ongoing basis. This significantly altered plan also may present other associated dangers, but since no entity has fully reviewed its potential impacts on pipeline operations, the environment, the river, or public health and safety, we just don’t know.

Spectra has been working to build the AIM pipeline for years, and during this time frontline, grassroots groups like Stop the Algonquin Pipeline Expansion (SAPE), the Safe Energy Rights Group, and Resist Spectra have fought fiercely to halt the pipeline’s construction.  Mountainkeeper is deeply engaged in supporting the efforts of our allies in this important fight, which is why we are writing now to ask for your help.

Many of our elected officials, including Senator Charles Schumer, have also opposed the pipeline, but they haven’t taken concrete action to stop it. That is why we are calling on Senator Schumer to reach out to President Obama and ask him to intercede immediately with FERC to halt construction of the AIM pipeline now.

To send Senator Schumer a loud and clear message that he must act now to stop AIM, we are co-sponsoring a 9:00 am rally on Wednesday, October 26th at the Senator’s Manhattan office, 780 3rd Avenue (between 48th & 49th Streets).  Allied organizations will hold solidarity actions the same day at Senator Schumer’s offices in Peekskill, Rochester, Binghamton, Albany, Long Island, Buffalo, Syracuse, and Washington DC.

We would love to have you join us at any one of these actions, but whether or not you can make it, please send your message now to Senator Schumer and tell him why it’s critical that he acts immediately to stop the AIM pipeline.