On the Bright Side: Food, fun and fracking highlighted at Taste of the Catskills 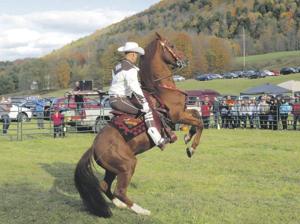 Sounds of giddy children, melodic musicians and chatty adults reverberated through the Catskills in Delhi over the weekend. The Taste of the Catskills Festival, outfitted to entertain, feed and educate, sprawled over spacious lawn at Maple Shade Farm, open to a large crowd.

Vendors lined up inside the nearby Maple Shade barn, built in 1897 with hand-hewn beams. Advocating for the region, vendor Catskill Mountainkeeper presented a lineup of footage showing the detriments of hydraulic fracturing for natural gas, but at the same time acknowledged that the issue boils down to changing the American culture, heady with non-renewable energy consumption.

On Saturday, Catskill Mountainkeeper Executive Director Ramsey Adams presented Natalie Merchant and Jon Bowermaster, of Ulster County, with the honor of “Keeper of the Catskills Award.”

Read the entire story by Cheryl Petterson from the Oneonta Daily Star here.