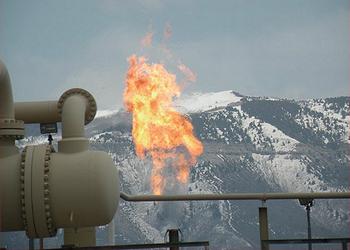 WASHINGTON, DC, January 14, 2015 (ENS) – The Obama Administration today announced a new goal to cut methane emissions from the oil and gas sector by 40 to 45 percent from 2012 levels by 2025, and a set of actions to put the United States on a path to achieve this goal....

The U.S. Environmental Protection Agency will initiate a rulemaking effort to set standards for emissions of methane and volatile organic compounds from new and modified oil and gas production sources, and natural gas processing and transmission sources, but not for existing sources of emissions.

The United States is now the world’s largest natural gas producer. Methane, the primary component of natural gas, is a potent greenhouse gas, with 25 times the heat-trapping potential of carbon dioxide, CO2, over a 100-year period.

CO2 is the most abundant greenhouse gas, but methane is more damaging to the climate.

Environmental groups have pushed for methane standards for both new and existing sources because methane is over 80 times more potent than carbon dioxide, CO2, when it comes to climate change in the short term.

U.S. oil production is at the highest level in nearly 30 years, providing energy security, economic benefits and an abundant source of clean-burning fuel to power and heat American homes and businesses. Continuing to rely on these domestic energy resources is a critical element of the President Obama’s energy strategy, the White House said.

Methane emissions accounted for nearly 10 percent of U.S. greenhouse gas emissions in 2012, of which nearly 30 percent came from the production transmission and distribution of oil and natural gas.

Emissions from the oil and gas sector are down 16 percent since 1990 and current data show reductions from certain parts of the sector, such as well completions.

Building on five technical white papers issued last spring, the peer review and public input received on these documents, and the actions that some states are already taking, EPA will initiate a rulemaking effort to set standards for emissions of methane and volatile organic compounds from new and modified oil and gas production sources, and natural gas processing and transmission sources.

In developing these standards, EPA will work with industry, states, tribes, and other stakeholders to consider a range of commonsense approaches that can reduce emissions from the sources discussed in the agency’s five Oil and Gas White Papers. They cover oil well completions, pneumatic pumps, and leaks from well sites, gathering and boosting stations, and compressor stations.

The White House says the steps announced today are “a sound economic and public health strategy because reducing methane emissions means capturing valuable fuel that is otherwise wasted and reducing other harmful pollutants – a win for public health and the economy.”

Achieving the Administration’s goal would save up to 180 billion cubic feet of natural gas in 2025, enough to heat more than two million homes for a year. The measure supports businesses that manufacture and sell cost-effective technologies to identify, quantify, and reduce methane emissions.

Environmental groups lost no time in targeting what they view as weaknesses of the Obama Administration’s plan.

They point out that the proposed rules would cover new and modified oil and gas production sources, and natural gas processing and transmission sources, but omit hundreds of thousands of existing oil and gas wells and other operations that are emitting methane right now.

The Clean Air Act allows for the regulation of existing sources by the EPA, and it is estimated that almost 90 percent of projected 2018 emissions will come from oil production and existing natural gas infrastructure.

“Although these new rules are a welcome step in the right direction, they only govern new sources of methane pollution,” said Earthworks Executive Director Jennifer Krill. “Recent studies show the worst methane polluters include aging or even abandoned facilities. Global warming doesn’t care if a greenhouse gas source is new or old, and neither should these rules. Meaningful reductions in methane pollution from existing sources cannot be tackled by voluntary measures,” she said.

The EPA says the agency will continue to promote transparency and accountability for existing sources of methane by strengthening its Greenhouse Gas Reporting Program to require reporting in all segments of the industry.

Sierra Club Executive Director Michael Brune warned, “Controlling methane is not an end in itself and it will not make fracked oil and gas climate friendly. Continued reliance on dirty fossil fuels is a dangerous course for our communities and our climate.”

In Pennsylvania, where methane is emitted from the state’s many fracking operations, John Norbeck, vice president and chief operating officer of the nonprofit group PennFuture, said, “For Pennsylvanians, the rule has missed the mark by identifying only new sources and providing no clear pathway for existing sources of emissions.”

“As the fastest growing natural gas producing state in the nation, Pennsylvania has thousands of operating gas wells that are spewing methane into the air and exacerbating climate change – sources that are not addressed in this proposed federal rule,” he said.

“Further, the 10-year time frame is simply too long,” said Norbeck, who urged Governor-elect Tom Wolf, a Democrat who this week takes over from Republican Tom Corbett, to launch a rulemaking in his first 100 days to directly regulate methane in Pennsylvania.

Tom Goldtooth, director of the Indigenous Environmental Network said, “Our tribes and Native communities all over the U.S. have seen firsthand the destruction of our environment and our health from oil and gas drilling, wells, pipelines and waste dumps. We are also on the frontlines of the disastrous effects of climate change. Cutting methane and toxic air emissions is a matter of survival, yet the administration believes it would not be addressing existing contamination sources.”

“Our tribes are not mere stakeholders, but rights holders with the U.S. having fiduciary responsibilities to protect our lands and our people under treaty agreements and other obligations,” said Goldtooth. “We need more protections in place and we need them now.”

In addition to its regulatory activities, the EPA says several voluntary efforts to address methane emissions are underway, including EPA’s plans to expand the successful Natural Gas STAR Program by launching a new partnership in collaboration with key stakeholders later in 2015.

Under the new program EPA will work with the departments of Energy and Transportation and companies, individually or through broader initiatives such as the Downstream Initiative or the One Future Initiative, to develop and verify commitments to reduce methane emissions.

But voluntary controls are not enough for the proposed regulations’ many critics.

“Having a strategy for reducing the climate impacts of methane is a critical step in the right direction, but making them voluntary for the gas and oil industry does not make sense,” said Wes Gillingham, director of Catskill Mountainkeeper in New York State. “This is the same industry that is voluntarily impacting communities and making people sick all across the country. Voluntary measures are not a substitute for sensible standards.”

“Every day we see more and more scientific documentation showing us just how serious the methane problem is, from methane plumes over gas fields to massive leaks from pipeline infrastructure,” said Gillingham. “President Obama and the EPA have acknowledged the problem, but need to be more aggressive to deal with the pollution legacy that is threatening our planet.”

EPA will develop new guidelines to assist states in reducing ozone-forming pollutants from existing oil and gas systems in areas that do not meet the ground-level ozone health standard and in states in the Ozone Transport Region. These guidelines will also reduce methane emissions in these areas.

The guidelines will help states that are developing clean air ozone plans by providing a ready-to-adopt control measure that they can include in those plans.

EPA will explore potential regulatory opportunities for applying remote sensing technologies and other innovations in measurement and monitoring technology to further improve the identification and quantification of emissions and improve the overall accuracy and transparency of reported data cost-effectively.

Other federal agencies will also be involved in reducing methane emissions.

The Department of Interior’s Bureau of Land Management, BLM, will update decades-old standards to reduce wasteful venting, flaring, and leaks of natural gas, which is primarily methane, from oil and gas wells.

Interior Secretary Sally Jewell said today, “These standards, to be proposed this spring, will address both new and existing oil and gas wells on public lands, in operational aspects not covered by EPA’s proposed rule.”

The BLM also released an Advanced Notice of Proposed Rulemaking to gather public comment on the development of a program for the capture and sale, or disposal, of waste mine methane on lands leased by the federal government. BLM will work closely with the EPA to ensure an integrated approach.

“Reducing methane emissions is an important part of the picture as we work collaboratively with federal, state, local and industry partners to harness America’s domestic energy potential while also tackling climate change,” said Jewell. “This strategy will help improve public health and safety, and ensure a fair return to taxpayers for developing federal oil and gas resources.”

“The President’s strategy will put captured methane to productive use as a source of cleaner energy for power generation, heating and manufacturing, and will spur investment in local economies through modernized natural gas pipeline gathering and processing projects, generating new revenue and creating American jobs,” the secretary said.

The Department of Transportation’s Pipeline and Hazardous Materials Safety Administration will propose natural gas pipeline safety standards in 2015. While the standards will focus on safety, they are expected to lower methane emissions as well.

The President’s FY16 Budget will propose $15 million in funding for the Department of Energy to develop and demonstrate more cost-effective technologies to detect and reduce losses from natural gas transmission and distribution systems. This will include efforts to repair leaks and develop next generation compressors.

The President’s budget also will propose $10 million to launch a program at the Energy Department to enhance the quantification of emissions from natural gas infrastructure for inclusion in the national Greenhouse Gas Inventory in coordination with EPA.