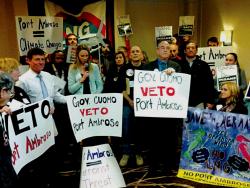 They came from New Jersey, they came from Long Island and they came from Rockaway, all united in their efforts to make sure the proposed Port Ambrose Liquefied Natural Gas Facility never begins construction...

They cited safety, climate, the lack of need, destruction of the marine environment, and dubious economics at a press conference at the JFK Airport Hilton in Jamaica, moments before the official public hearing on the project.

“LNG ports are a target for terrorism; threaten fishing, jobs, and tourism; and are a disaster for our climate,” said Cassandra Ornell, Staff Scientist for the non-profit Clean Ocean Action.

Assemblyman Phil Goldfeder has been compelling the Governor for weeks to veto the project.

Hundreds braved the cold to offer their opposition to the LNG proposal at the JFK Airport Hilton.In his testimony, the Assemblyman blasted the federal government’s disregard for public concern and input on the proposal, as well as risks posed to Sandy-devastated communities in Rockaway.

“Our beachfront communities in Rockaway have recently been devastated by Superstorm Sandy. We have seen firsthand what torturing our environment can do to us if we don’t take the proper precautions for the future,” said Goldfeder. “On top of everything our families have gone through, approving the Port Ambrose LNG project is simply unacceptable.”

The public hearing, held at the JFK Airport Hilton in Jamaica, was organized by the U.S. Coast Guard (USCG) and the U.S. Maritime Administration (MarAd), the federal agencies tasked with reviewing the potential environmental and community impacts posed by the Port Ambrose project.

Assemblyman Phil Goldfeder says the Port Ambrose LNG project is “simply unacceptable.”Photos by Eric MacGregor Hundreds braved arctic temperatures to fill the hall to capacity, with more than one hundred signed up to comment during the two hours of testimony.

The Assemblyman led the testimony from elected officials, which included incoming freshman Assemblyman Todd Kaminsky, Nassau County Legislators and members of the Long Beach City Council, which had unanimously voted to oppose the project.

MarAd and USGC had originally planned to hold a 60-day comment period on the most recent Environmental Impact Statement issued for the project, with two public hearings scheduled: Wednesday’s hearing and another scheduled for New Jersey.

However, in response to the Assemblyman’s request last month for greater community involvement in the hearing process, the agencies have announced a 30-day extension to the comment period and a third public hearing at a time and place to be determined.

Community Board 14 chairperson Dolores Orr gives her testimony at the LNG public hearing on Jan. 7.The Port Ambrose project proposes the construction of a deep-water port facility located approximately 17 nautical miles south of Jones Beach, Long Island. According to the Federal Energy Regulatory Commission (FERC), LNG facilities are can be used to export natural gas from the U.S.; supply existing interstate pipelines, or store natural gas for periods of peak demand. Since it was first proposed, the plan has stirred opposition among environmental groups and local governments.

A previous plan by Liberty LNG placed the port off the coast of New Jersey, until New Jersey Governor Chris Christie vetoed the project in 2011.

Last month, as reported by The Wave, Goldfeder wrote to Cuomo calling on him to follow Christie’s lead and veto the proposal.

At Wednesday’s hearing, Goldfeder acknowledged the Governor’s recent decision to ban hydrofracking in New York State, adding that the Governor ought to make the same decision on Port Ambrose.

“[Wednesday night’s] hearing was a strong showing that nobody in New York wants Port Ambrose” said Jessica Roff of Catskill Mountainkeeper and New Yorkers Against Fracking. “We all know that putting money into fossil fuel infrastructure is a mistake when more investment in renewables is needed. Assemblyman Goldfeder was spot-on in his comments that the agencies were doing the bare minimum to involve the communities and in saying that the project is far too risky and dangerous to implement.”

Existing LNG import facilities around the country are operating well below capacity due to the lack of demand for imported gas.