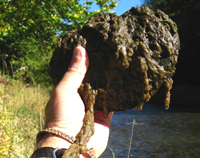 Historically, didymo has been found in cool, clear, nutrient poor waters but has expanded its worldwide distribution to include nutrient rich waters. Rivers with stable, regulated flows are particularly at risk.

How do I know if I find didymo?

What are the Impacts of didymo?

Unlike many other aquatic invasive plants, didymo grows on the bottom of both flowing and still waters. It is characterized by the development of thick mat-like growths (blooms), which can last for months, even in fast flowing streams. During blooms, these mats may completely cover long stretches of stream beds, altering stream conditions and choking out many of the organisms that live on the stream bottom, which can affect trout and other fish by limiting their food. For the recreational user, footing can become very difficult due to the heavy growths.

Where has didymo been found in The Catskills?

Didymo has been confirmed in the following rivers in the Catskills: