Help Us Go to Court Against Constitution Pipeline! 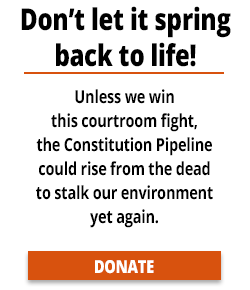 Just four months ago, you and I won a dramatic victory when New York State dealt an apparent death blow to the Constitution Pipeline by denying it a crucial water quality certification. But the Constitution Pipeline Company LLC -- the energy giant behind this fossil fuel monstrosity -- will not let the project die. The company has just filed suit in the U.S. Court of Appeals, challenging not only the State’s decision but its very right to stop the pipeline.

Catskill Mountainkeeper has moved swiftly to intervene in this pivotal case and ensure that New York State’s historic decision is upheld. Please make a special tax-deductible contribution right now to help us wage this all-important fight for our environment, our communities, and our climate.

The Constitution Pipeline would carry fracked gas from Pennsylvania through New York State cutting a swath of destruction that would claim 1,000 acres of forests and farms while threatening 277 vulnerable waterways and countless vulnerable communities. Meanwhile, this project would shackle us to climate-wrecking fossil fuels for decades to come.

The federal government rubber-stamped this terribly destructive scheme, as it has so many pipelines before it. But then the New York State Department of Environmental Conservation did something all too rare these days: it listened to the voice of the people, not the demands of the powerful, and it effectively declared the pipeline dead on arrival under the Clean Water Act.

Even worse, an energy giant victory could set a far-reaching legal precedent that might strip the state of its power to stop any and all pipeline projects. We simply cannot let that happen!

That’s why it’s absolutely critical for Catskill Mountainkeeper to wage and win this fight in defense of New York State’s bold decision to kill the Constitution Pipeline. But we can’t do it without your help.

Please make a tax-deductible gift to Mountainkeeper today so we can face down Constitution LLC and make sure its Pipeline stays dead and buried forever.

Never forget that you brought us this far, that you and thousands of other good people compelled New York State to do the right thing and reject the energy company’s fossil fuel nightmare.

Now I’m asking you to help Mountainkeeper finish the job. Let’s kill this pipeline and Free New York from Fossil Fuels. Thanks for standing with us in the U.S. Court of Appeals.