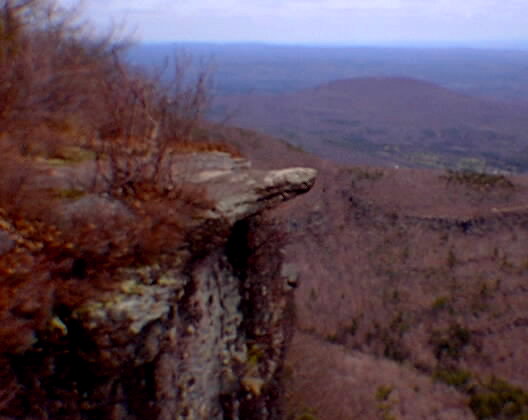 Devonian conglomerate crops out along the ridge top of the east-facing Catskill front in North Lake State Park (near Tannersville, NY).

Uplift from the Acadian Orogeny in the New England Region resulted in the erosion and deposition of large quantities of sediments into a fluctuating shallow sea that covered most of eastern North America during Devonian time. The Catskills region was proximal to the Acadian Highlands, and therefore received a vast supply of sediments. (The boundary between the two geologic regions is a line approximating the location of the modern Hudson River; the Acadian Highlands was to the east. To the west was an alluvial plain that grew and shrank with the rise and fall of sea level.) Sediments of Devonian age accumulated as a sedimentary wedge to as much as 10,000 feet in the Catskills region; these sedimentary deposits are thickest in the east and grow progressively thinner westward and southward. Massive accumulations of conglomerate and sandstone exposed along the eastern edge of the Catskills plateau led to an early interpretation that the Catskills formed as a great delta-type deposit, similar to the modern greater Mississippi Delta. However, complexities in the sequence of the sedimentary formations throughout the greater Catskills have been revealed from more recent geological investigations. A new perspective of the Catskills sedimentary sequence is model of fluctuating shorelines and prograding alluvial environments along the western margin of the Acadian upland. Farther to the west massive quanities of organic-rich mud accumulated in a deeper restricted seaway basin. Today, these organic-rich deposits represent the oil and gas shales that are abundant throught the Appalachian basins and plateaus of the Ohio Valley region.

Today the Catskills are an erosionally-dissected plateau. Like the entire New England region it displays the effects of Pleistocene continental glaciation. The outcrop belt of Devonian rock in map below 2 roughly outlines the extent of Catskills. The southern extent of the Devonian outcrop belt is part of the folded strata along the Delaware River valley along the New Jersey/Pennsylvania border. Devonian sedimentary rocks also crop out closer to New York City in the Green Pond Outlier, a large syncline in northern New Jersey and southern New York containing middle and upper sedimentary Devonian rocks. Devonian sedimentary rocks are also preserved in a complex geologic area in northeastern Connecticut and extending northward into central Massachusetts.