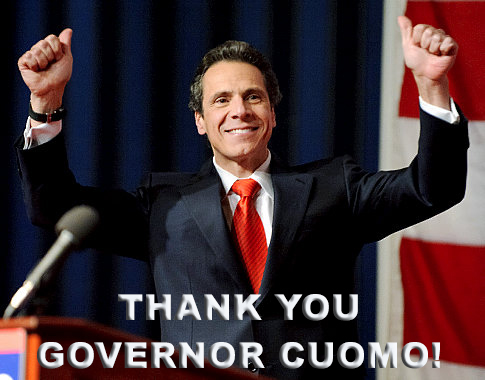 We are so proud to be New Yorkers! Thank you Governor Cuomo for putting the people of New York and their interests above the interests of the gas industry.

After looking at the science on fracking, the Acting Commissioner of Health, Howard Zucker concluded what residents across New York have been saying for years.  When advising the Governor, Zucker stated "Would I live in a community that would allow fracking? The answer is no."

At the same time as New York State takes this powerful stance against the fossil fuel industry, it has also made major moves to support a green economy by investing in renewable energy, micro grids and conservation.

With climate change likely to be THE issue of our time, we applaud Governor Cuomo for being a true leader. New York State can show the nation what is possible. Together we can lead a just transition to an economy based on efficiency and clean, renewable energy.

Please join us in sending a HUGE thank you to Governor Cuomo, Acting Commissioner Zucker and Commissioner Martens.

And if you are in New York City today, join us for a Victory Rally:

Outside of Cuomo's Manhattan office