December 16, 2008, ProPublica: NYC: Gas Drilling Will Raise the Cost of Water by 30 Percent

NYC: Gas Drilling Will Raise the Cost of Water by 30 Percent 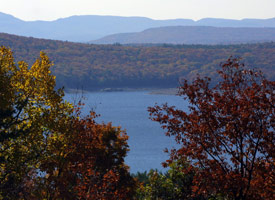 The Ashokan Reservoir is part of the city's Catskill water supply system. (Credit: Jim McKnight/AP Photo)
Using some of the strongest language yet regarding the impacts that natural gas drilling in New York state could have on New York City's drinking water supply, the city's chief accountant warned state officials that drilling could have "crippling implications" for the city's water system.

City Comptroller William Thompson wrote State Department of Environmental Conservation officials Monday following a city council hearing about the threats upstate drilling might pose for the city. Thompson warned that drilling near the Catskill reservoirs that provide some nine million people with drinking water could degrade the water quality enough to force the city to build a new $10 billion water treatment plant. New York City is currently one of just four cities in the U.S. that the EPA allows to provide residents water without any filtration. If that permit is revoked, New York would have to borrow the money for the plant and, Thompson warned, city residents would pay a 30 percent water increase just to cover the interest payments.

Thompson's letter, and the City Council's hearings, follow a series of stories by ProPublica that detail a pattern of water contamination from gas drilling in seven states. We have also raised questions about New York state's regulatory preparedness for gas drilling. After those stories were published, New York began a fresh environmental review and has held a series of public hearings across the state.