Monticello – A new grassroots group designed to preserve the quality of life in the Catskills has been formed.

Catskill Mountainkeeper was launched in front of the Sullivan County Government Center in Monticello on Thursday.

“Residents of the Catskills are as diverse as in any place on earth, but one thing everyone can unite on is that this is a special region that needs its people speaking up so that its tremendous cultural and natural resources stay intact,” said Joe Martens, the group’s chairman. “Catskill Mountainkeeper will build an active network of citizens to make that happen.”

Martens is also the president of the Open Space Institute, one of the several groups sponsoring Catskill Mountainkeeper.

The group’s key priority is to push for a comprehensive, regional vision that takes into account new thinking about smart group and wise use of the area’s natural resources, he said.

“We all know there’s a great deal of development pressure on the Catskills, but we also know there are good and bad options under review this very moment,” said Tom Alworth, another Catskill Mountainkeeper board member and the executive director of the Catskill Center for Conservation and Development. “When it’s out-of-scale, non-sustainable proposals like the massive casinos proposed for Sullivan County, Catskill Mountainkeeper can help get the word out – and make sure that those who want clean air, open space and a great quality of life win the day for our region.”

“I live here, I work here, and I love living and working here, and I want the Catskills always to be a place I am proud to live in,” said Wes Gillingham, Catskills Mountainkeeper’s program director and also the co-owner of the Wild Roots Farm in Sullivan County.

“The last thing my neighbors and I want to do is fight traffic, see the countryside taken over by haphazard development or breathe polluted air.” 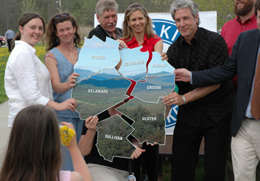