The Quinnipiac University poll released today shows statewide opposition to fracking is growing. The new poll finds opponents outnumbering supporters of fracking in the survey by 46-39 percent — a new low for fracking proponents and the first time a “clear margin” has opposed it in Quinnipiac polling. Maurice Carroll, director of the Quinnipiac University Polling Institute stated that voters are "turning negative on the basic idea..."  of fracking. According to Ramsay Adams, Mountainkeeper Executive Director, "The more that New Yorkers learn about fracking, the more they oppose it.  The oil and gas industry is waging a massive, glitzy, smooth talking campaign to convince New Yorkers that they can get fracked and like it.  New Yorkers aren't buying it." CLICK HERE TO VIEW THE ENTIRE POLL

Across the country, there has been a rising tide of citizen opposition to extreme energy extraction.  From strip-mining for coal, to hydrofracking for natural gas, to the tar sands; more and more people are rising up to confront the devastating effects of extreme energy extraction on their communities - and people are increasingly seeing all of these struggles as interconnected - and ultimately  about climate change. This is why people from all walks of life are stepping up and going to hearings, taking days off from work to be at rallies and in some cases making the personal choice of civil disobedience to stand up for what is right.  Below is a story about one of these struggles. 12 Arrested Blockading Controversial Fracking Infrastructure (Reprinted with Permission from our allies at Green Umbrella) Sandra Steingraber PhD., biologist, author and Trumansburg, NY resident, was arrested alongside residents of Seneca Lake and local college students to oppose Kansas City, MO based Inergy, natural gas and liquid petroleum gas storage facility, which would lock in natural gas development in the Marcellus Shale region. Protesters have linked arms and deployed a banner reading “Our Future is Unfractured, We Are Greater Than Dirty Inergy” across the entrance to the facility on NY State Route 14. 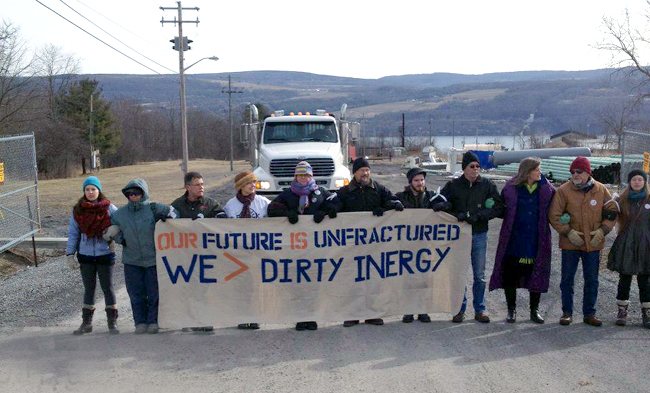 The blockade precedes a 250+ person rally opposing the Inergy facility scheduled to begin at the Watkins Glen Village Marina at 5 p.m. today.  Twenty-five demonstrators blockaded the Inergy facility, which they say is one example of numerous fracking infrastructure projects that the New York State Department of Environmental Conservation (DEC) and Federal Energy Regulatory Commission have allowed to “slip in the back door” while New York Gov. Andrew Cuomo debates allowing the controversial and extreme process of horizontal hydraulic fracturing. Steingraber, who lives in neighboring Tompkins County said, “It is wrong to bury explosive, toxic petroleum gases in underground chambers next to a source of drinking water for 100,000 people. It is wrong to build out the infrastructure for fracking at a time of climate emergency. It is right for me come to the shores of Seneca Lake, where my 11-year-old son was born, and say, with my voice and with my body, as a mother and biologist, that this facility is a threat to life and health.” The blockade joins a growing national movement to call attention to environmental injustices caused by unconventional and extreme fossil fuel extraction techniques, including Inergy’s hotly debated salt cavern gas storage facility proposed for Reading, NY. Dennis Fox, a Cornell University Sophomore said, “This isn’t just a local issue—when students stand shoulder to shoulder with communities on the frontlines of the fight against extreme projects like Inergy’s, we’re one step closer to stopping fracking, and one step closer to protecting my generation’s future from poisoned water and devastating climate change.” Inergy’s facility has generated widespread concerns for its proximity to Seneca Lake, New York State’s largest fresh water body and the source of drinking water for 100,000 people. Michael Dineen, a resident of Seneca County, which contains a portion of Seneca Lake, said, “The priorities of Inergy’s project are all wrong. Drinking water and people’s health are more valuable than gas. The Finger Lakes region holds one of the largest pool of fresh water in the United States and needs our protection—we don’t need to lock in investments in dirty fracking infrastructure that will deepen our dependence on an inherently contaminating industry.” Melisa Chipman, a resident of Schuyler County, where the facility is located said, “Not only do salt cavern gas storage facilities like Inergy’s have a very high probability of ‘catastrophic equipment failure,’ but I do not want more truck traffic polluting our air, destroying our roads, and scaring tourists away.” The DEC has received increasingly vocal criticism from local wineries and tourist businesses for refusing to conduct a comprehensive review of the potential environmental and economic impacts of Inergy’s plans to expand gas storage capacity of the current facility from 1.5 to 10.0 billion cubic feet. OUR ALLIES AT EARTHJUSTICE HAVE AN ACTION THAT WE SUPPORT: CLICK HERE TO TELL THE FEDERAL ENERGY REGULATORY COMMISSION  TO KEEP THE FRACKING INDUSTRY INFRASTRUCTURE OUT OF NEW YORK