The Philadelphia Enquirer, July 6, 2008, "Betting on a Bonanza" Natural Gas in PA

Betting on a bonanza

WAYNE COUNTY, Pa. - In this bucolic northeastern corner of Pennsylvania, old-timers and newcomers alike feel deep attachment to the land.

That is true more than ever because of intense interest in what sits 6,000 feet below the rugged hills: a vast store of natural gas and an undreamed-of chance at wealth.

"This is the biggest energy play in Pennsylvania since Col. Drake struck oil in 1859," said petroleum geologist G. Warfield "Skip" Hobbs IV, who has analyzed natural gas in this part of Pennsylvania for investors.

In a time of relentlessly rising energy prices, industry is after one of the hottest prospects in the United States - gas trapped in the pores of a 365 million-year-old layer of rock called Marcellus shale that stretches from New York through West Virginia. It is especially promising in northeastern Pennsylvania.

And especially troubling to local environmentalists. 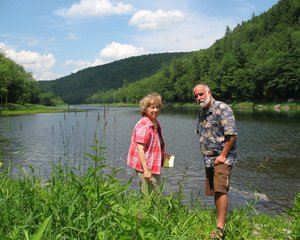 HAROLD BRUBAKER / Inquirer Staff
Barbara Arrindell (left) and Pat Carullo are cofounders of Damascus Citizens for Sustainability, a group that is opposed to gas drilling in the Upper Delaware River basin. They were in Lackawaxen, Pa.

A big reach: Gas from a stone

Last summer, gas drillers paid $50 an acre to lease the county's forests, hay fields and pastures. That price has skyrocketed to more than $2,000 an acre, with the possibility of millions of dollars more in royalties paid to the landowner if drilling is a big success.

The potential bonanza has come like a shot out of the blue in Wayne County, where the biggest town, Honesdale, has 5,000 people. It's a place in transition, with Branko's Patisserie du Jour sitting across from a Case International Harvester parts dealer on Main Street.

When an agent for Chesapeake Energy Corp., the nation's second-largest independent natural-gas producer, knocked on Harold Welch's door here last summer, the dairy farmer on a dirt road was not interested.

"I didn't want this place destroyed," said Welch, who installed 142 birdhouses to attract swallows and bluebirds to the 212-acre farm. Early-morning birdsong resounds on hills where his grandfather spent a lifetime digging out and hauling away rocks.

Welch, with three children who hunt and swim on the farm, came around after talking with neighbors and joining a group that wrote a six-year lease with stronger protections for land and water.

Signing with Chesapeake for $750 an acre in late November, he missed the dramatically higher prices this year. Still, his $159,000 check was enough to put up a sorely needed silo, buy milking equipment, and tithe $16,000 to religious organizations.

The natural-gas industry has long known of the resource beneath Welch's farm. But now the rise in energy prices - the costs of crude oil and natural gas have doubled over the last year - has made it potentially profitable to drill for the hard-to-extract gas.

Researchers at Pennsylvania State University and the State University of New York Fredonia estimated this year that the Marcellus black shale in northern Appalachia contained 168 trillion to 516 trillion cubic feet of gas. They said about 10 percent could be retrieved.

It will take years for production to reach critical mass because of a shortage of drilling rigs, a lack of pipelines to carry the gas to market, and a recent insistence by authorities that water permits are needed for drilling.

That gives opponents of the drilling, and there are many, time to act. One of them, Pat Carullo, said he would be thrilled for farmers like Welch "to get lots and lots and lots of the profits from the oil industry and the gas industry, but we will challenge the actual permitting process. Maybe they will get to keep their signing bonuses, but there won't be any wells drilled."

The environmental group Carullo cofounded, Damascus Citizens for Sustainability, has hired high-profile environmental lawyer Richard J. Lippes - who represented homeowners in the Love Canal toxic-waste case in western New York state in the 1970s - to help in the fight.

Carullo, who kayaks or rafts on the pristine Upper Delaware River whenever he can, said he had fled to Wayne County from the New York area after the Sept. 11, 2001, attacks. "I want to go in the river, and I want the eagles to be OK," he said.

At its best, gas drilling makes harsh marks on the land. Drilling, laying pipes, and building other infrastructure to market the gas could hold hostage for a decade or more the landscape many residents treasure.

Proponents argue it is wrong to always push such disruption off on other parts of the world. And when a well is finished, they say, all that's visible are a few pipes sticking six feet out of the ground.

But before that, roads must be built to get heavy equipment to drilling areas, where four or five acres are cleared of all vegetation.

Drillers dig basins, or impoundments, to hold millions of gallons of water used in the drilling and to store brine and other fluids that come out of the well.

A typical natural-gas well in Wayne County, costing as much as $5 million, is expected to go down more than a mile and then to turn horizontally through the shale, so one well could extract gas from a larger area than a vertical well.

Because the gas is trapped in the shale's pores, allowing only a small amount to reach the well bore, the industry uses a process called fracturing to open cracks that allow more natural gas - created when the Earth's heat cooked organic matter in an ancient seabed - to escape.

To accomplish that, an oil-services company, such as Halliburton, injects a mixture of water, sand and chemicals into the well under high pressure. Most of that fluid is pumped back out. But some remains, and environmentalists worry that it could get into fresh water.

Tom Rathbun, spokesman for the Bureau of Oil and Gas Management in the Pennsylvania Department of Environmental Protection, minimized the threat. He said that freshwater aquifers were sealed from the well, and that the fracturing took place far below.

But at the Delaware Riverkeeper Network, deputy director Tracy Carluccio said runoff from drilling sites was a huge worry. The Delaware River watershed supplies water for millions. "We can't play around with this," she said.

Even landowners pursuing a lease can relate to the environmental concerns. Jo Clearwater, who has 36 acres off a dirt road in the township of Damascus, heard about the gas industry coming to her area last Halloween.

"I panicked," said Clearwater, who raises medicinal herbs and has a dozen goats in the meadow, 100 chickens in the farmyard, and three dogs. "All I have is my land and what I can do, and now it's going to be taken away. It's going to be poisoned."

Instead of being paralyzed, Clearwater got active on environmental issues with the Northern Wayne Property Owners Alliance, which is negotiating with gas companies on behalf of owners of 70,000 acres in Wayne and Susquehanna Counties.

Not far from Clearwater's place, farmer Bill Adams stood at the end of his lane with one leg propped on his neighbor's four-wheeler and talked about gas leasing. He said he was not at all concerned about environmental issues.

Adams, with the leathery skin of a farmer who spent a lifetime mowing hay, leased his 577 acres to Chesapeake, but he would not say for how much. "I didn't get $25" per acre, he assured.

On the other side of the county, Louis Matoushek, who leased his 195 acres to Stone Energy Corp. in August for $125 an acre, consoles himself with the prospect of substantial royalty payments.

"If something comes out of that ground, the lease money isn't going to be much," relatively speaking, said Matoushek, whose farm has the only well that has been drilled in the county and is still far from producing.

Chesapeake, a Stone competitor, estimated that a Marcellus well draining 160 acres could produce two billion cubic feet of natural gas. At current prices, the landowner's royalty checks from such a well could total $2.5 million to $4 million.

Welch, the dairy farmer, said his experience last year taught him to deal differently with the industry.

In late October, he said, the agent for Chesapeake told him that $250 an acre was the top lease price, and that there was nothing to rumors of $500 an acre. A month later, he got three times the supposed $250 limit.

So when Chesapeake approached him recently about leasing land for a pipeline, Welch decided to play tough. "I learned my lesson last fall," he said. "I'm waiting them out this time."