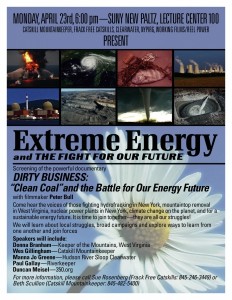 When you are fighting against fracking you are part of a larger global effort to wean the world off fossil fuels and move us toward using renewable energy sources so that we avert catastrophic global warming. You are fighting the same fight as those who are trying to stop mountaintop removal in West VA,  the Keystone XL pipeline, which would transport tar-sands oil (whose extraction and refining produces up to 30 percent more greenhouse gases than conventional oil) and dangerous nuclear power...

You have become a member of a worldwide effort to move from polluting carbon fossil fuels to renewable energy alternatives. The world is running short of easy to access fossil fuels, but rather than take the diminishing supplies as a sign to change our paradigm to renewable energy, we have instead gone to more extreme methods (such as hydrofracturing) to remove it from the earth. While these extreme methods temporarily give us the fossil fuels we crave, the extraction process comes with a big price tag to our environment and our health and does nothing to curb our carbon footprint or mitigate climate change. At the “Planet Under Pressure” conference in London last month, scientists warned that the world is close to reaching tipping points that will make it irreversibly hotter, making this decade critical in efforts to contain global warming. While the science of climate change is complex and not totally certain, it is certain that so far we have substantially underestimated the problem.

The polar ice sheets are melting 100 years ahead of 2001 forecasts and you just have to look at the warmest winter we’ve ever had to see that there is a huge problem. Unfortunately, the United States has been the chief obstacle to moving away from a fossil-fuel-based economy, in spite of the fact that we are the largest historical emitter. But we need to move forward.  First we must acknowledge the grievous mistake we made in the 1980s when we failed to create a long-term energy policy.  Then we need to move forward by encouraging our elected officials to take whatever political risks present themselves and stay on the course to develop clean energy solutions. This is a problem that will affect us all, particularly our children and grandchildren.  That is why Catskill Mountainkeeper has launched a new Carbon Neutral Initiative.  Visit our website to learn more about global warming and important information about how you can move toward becoming carbon neutral. COME TO THIS IMPORTANT FREE EVENT ON MONDAY, APRIL 23RD To educate the public, Catskill Mountainkeeper and our partners Frack Free Catskills, Clearwater, NYPIRG, and Working Films/Reel Power are sponsoring the “Extreme Energy and the Fight for Our Future Conference” on Monday 4/23/12 at 6:00 PM, SUNY New Paltz, Lecture Center 100. Please attend and hear from people who are fighting fracking and nuclear power in New York, mountaintop removal in W VA, climate change and working for a sustainable future. See a screening of "DIRTY BUSINESS: 'Clean Coal' and the Battle for Our Energy Future" Learn what you can do!   VISIT THE WATERSHED POST TO FIND OUT MORE ABOUT THE EVENT

Join us in writing to your legislators and Governor Cuomo demanding that this process be banned We often ask you to write to our government officials, and some of you may feel that you have already expressed your objections to fracking, however, it is critical in this fight that we keep up the pressure and that our elected officials hear from us again, and again about why fracking is too great a risk to our health and the well-being of our communities to be done in New York State. And please mention that you don’t want propane fracking in New York when you call Governor Cuomo as part of our “DON’T FRACK FRIDAYS” call campaign. His office can be reached at (518) 474-8390.