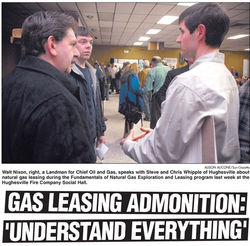 » View the Frequently Asked Questions here!
HUGHESVILLE — “Before you sign anything, understand everything.”

That advice was delivered Wednesday by Earle D. Robbins, director of the Penn State Cooperative Extension office in Tioga County, to the hundreds of people who flocked to a gas leasing workshop at the Hughesville Volunteer Fire Department social hall.

The workshop featured speakers primarily from the Cooperative Extension who were knowledgeable about gas leases and gas exploration activities in the area.

A gas lease, Robbins said, is very similar to a timber sale.

As in the case of timber sales, many landowners sign leases without fully understanding the terms of the document, Robbins said.

“I can’t believe the number of people who do sign (a gas lease) before understanding everything about that lease,” Robbins said.

Gas leases are binding legal documents that contain a lot of fine print and address issues, such as lease extensions and payment schedules, that typical landowners may not understand, he said.

“A lot of people think they can handle that individually,” he said. “Talk to somebody who is really knowledgeable.”

Williamsport attorney Lester L. Greevy, who is familiar with the legal land mines associated with gas leases, offered tips on negotiating a lease.

Greevy said landowners mistakenly believe the lease offered to them is the lease they must sign.

Nothing could be further from the truth, he said.

Landowners have the right to negotiate a lease that contains conditions that are mutually favorable to both the landowner and the company, he said.

Landowners should not take for granted that basic protections and conditions favorable to them are implied in the lease, Greevy said.

“If conditions are not spelled out in the document, they do not exist,” he said.

There are 37 potential issues a landowner can negotiate to modify a lease, he said.

Those include the terms of the lease and royalty payments, restrictions on the number of wells that may be drilled on the property, site restoration work, liability issues, abandonment terms and issues regarding any pipeline that must be installed on the property.

A lease may include an extension clause that automatically kicks in when the initial period of the lease expires, normally five years, Greevy said.

The extension clause should be replaced with a “right of first refusal” clause so a landowner can seek a better deal when the initial lease period expires, he said.

The clause gives the landowner the opportunity to take advantage of a competitive marketplace while giving the company the right to match any offer the landowner receives, he said.

Greevy recommended adding an arbitration clause to a lease so that any disagreements that arise between the company and the landowner may be resolved less expensively out of court.

Ken Balliet, an extension agent from Snyder County, reviewed financial aspects of gas leases. According to Balliet, there are two terms included in a lease: a primary term, which is the life of a lease, and a secondary term, which kicks in once drilling and production begins.

Economic benefits the landowner receives from the primary term is the per acre lease payment, he said. Once the secondary term kicks in, the economic benefits are from royalty payments.

The state has set a minimum royalty payment threshold at 12.5 percent, but landowners may negotiate a higher rate, Balliet said.

Balliet said he receives hundreds of phone calls from landowners trying to decide whether to sign a gas lease. A landowner should balance the benefits and risks of a gas lease before making the decision, he said.

Landowners should assess the goals of the property. For example, if property is maintained as habitat for wildlife and outdoor recreation, a landowner may not want the land disturbed by a drilling operation.

On the other hand, some landowners may value the financial benefits of a gas lease over maintaining open space, Balliet said.

Balliet said a lease should never be signed “just because your neighbor did,” if a person does not understand the impact a drilling operation will have on his property or based on money alone.

An informed decision should only be made when the entire leasing and drilling process is understood, he said.

“Do your homework,” he said.

Two basic permits and documents are needed for a well to be drilled, he said, and they are a drilling permit and an erosion and sediment control plan.

Other permits may be needed, depending on the situation. They include highway occupancy and stormwater management permits, he said.

The DEP is the agency a landowner should contact if drinking water has been adversely affected by a gas drilling operation, Umholtz said.

State law automatically assumes if a water well within 1,000 feet of a gas well experiences water quality issues within six months after the gas well’s construction, the problem was caused by the gas well, he said.

Landowners should be aware of issues the agency does not address, Umholtz said. The DEP cannot get involved in the leasing process or enforce a lease, he said.
'relatedarticles'
Do you like this post?
Tweet