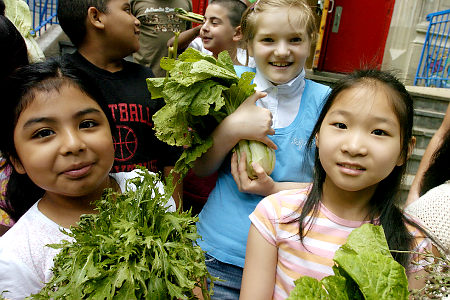 Third-graders from Public School 11 show off their greens.

The youngsters are in charge of a months-long farmers' market at Public School 11, where customers receive cooking tips along with their leafy purchases.

"For many students, this is the first time handling some of the vegetables," said grownup Deborah Osborne, the supervisor of the market, which opened Wednesday.

About 25 students managed a stall of bok choi, lettuce and fresh spices among other greens at the school on W.21st St. at Eighth Ave. Some handled change. Some kept the veggie crates full. Others advertised the goods at the top of their lungs.

"We don't use any chemicals here," said Stephanie Calderon, 9, offering rhubarb at $1.25 a bunch along with a complimentary recipe. "It's more healthy that way."

Garlic scapes and buttercrunch lettuce, priced $1 and $1.50, sold out within the first hour.

"Their prices are actually quite competitive with Union Square," said Christopher Gaddess, a private chef.

The young entrepreneurs will offer seasonal produce from Stoneledge Farm in the Catskills from 8 a.m. to noon every Wednesday until Thanksgiving. Proceeds will fund the market program - which hopes to break even - while unsold veggies will go to the little helpers.