On February 9, 2021, Catskill Mountainkeeper, the Catskill Center, and the Catskill Park Coalition convened a top-notch panel of New York State leaders to discuss the challenges and opportunities facing the park in 2021. The engaging conversation ranged from funding priorities to high use issues, and panelists identified lots of work to come.

Shameful move comes after tens of thousands speak up in opposition

The Delaware River Basin Commission voted to approve a permit for a highly controversial fracked gas terminal to be built in South Jersey, despite a flood of public comments opposing the dangerous project.

“This is an outrage. There are communities--including environmental justice communities--all along the fracked LNG transport path that will be harmed as a result of today's vote,” said Wes Gillingham, Associate Director at Catskill Mountainkeeper. “Fracking and shipping liquified natural gas around the world contributes to a climate travesty at the exact moment when these states and our nation should be doing all they can to reduce greenhouse gas emissions. The Delaware River Basin Commissioners have failed the people they represent. They are ignoring climate science, public health experts, and the basic facts of this project. Governor Murphy, Governor Carney, Governor Wolf, as a result of today's vote, you now fit into the category of CLIMATE CHANGE DENIER.”

Town of Kingston, NY—Today Catskill Mountainkeeper (Mountainkeeper) and Woodstock Land Conservancy (WLC) submitted new evidence about the historical significance of over a thousand acres of interconnected quarries and over 18 miles of interconnected wagon roads in the Bluestone Wild Forest to the Town of Kingston Town Board and Planning Board. This discovery confirms the need for a comprehensive environmental review of the proposed industrial steel-and-concrete fabrication plant at 850 Route 28.

Kathy Nolan, Senior Research Director for Mountainkeeper, called the new findings “dramatic and inspiring.”  “These historic resources must be fully investigated and protected during and following that investigation,” she said. “We can see in this work an emerging picture, not of one isolated quarry, but of a thriving and vitally important industry, written into the landscape and now being carefully reconstructed to bring history alive.”

December 1, 2020--Today’s action to stop the dangerous fracked LNG proposal at Gibbstown, NJ, is to create a Twitter Storm--a flurry of tweets--so that the DRBC governors and their Twitter followers will see opposition to this project all day long. There's more info about this project at the bottom of this email if you're looking for some background.

You can help make our Twitter storm a success in the following 4 ways:

High Use and Overuse In the NYS Forest Preserves 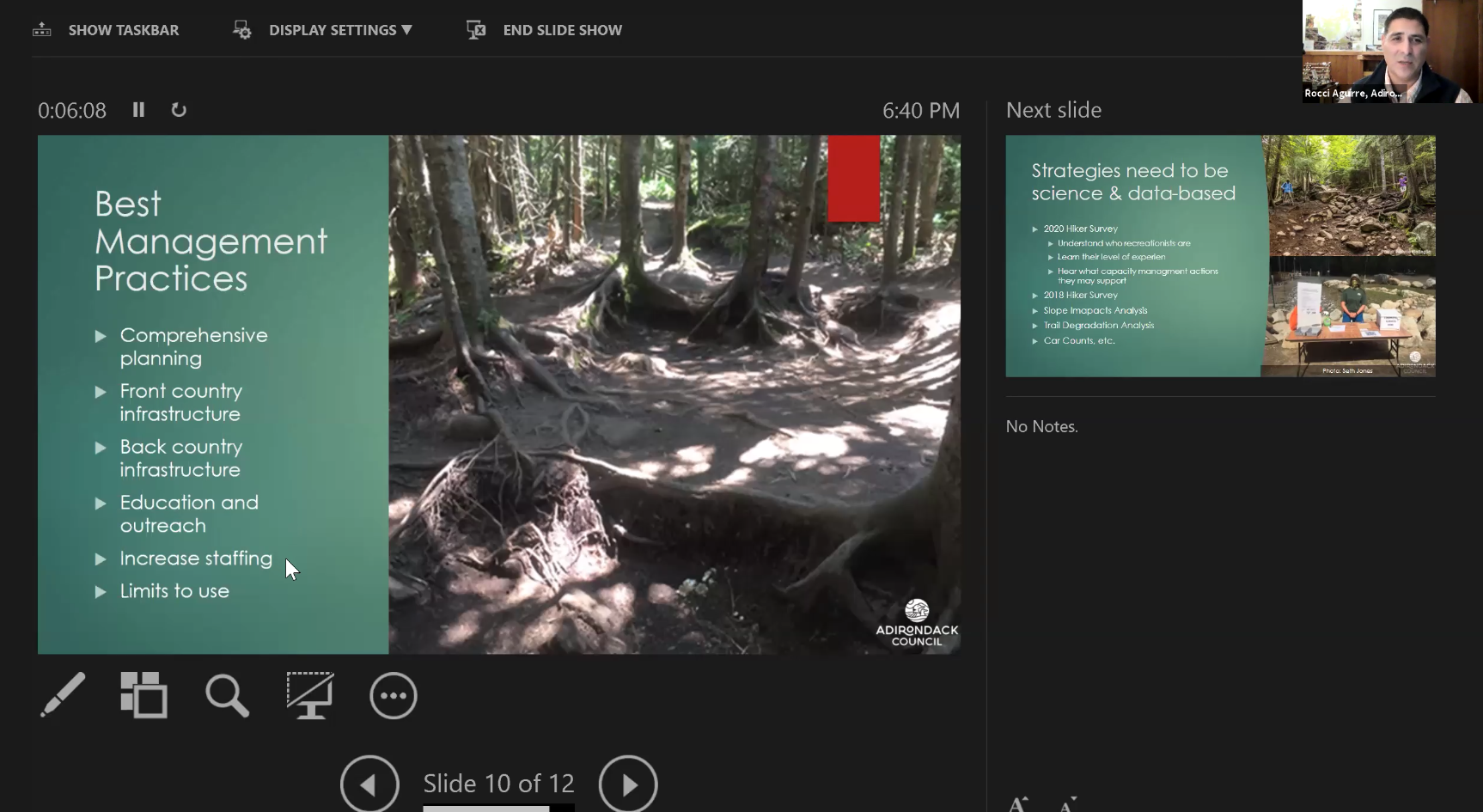 November 15, 2020 - Catskill Mountainkeeper is excited to present a one-of-a-kind opportunity to hear the experts really dig deep on the issues of high use and overuse in the Catskills and Adirondacks: on Thursday, October 22 at 6pm, we hosted a free online panel discussion with advocates, as well as state and national agencies, to explore challenges and solutions.

Katherine Nadeau of Catskill Mountainkeeper, Andy Mossey of The Catskill Center, and Rocci Aguirre of The Adirondack Council shared their first-hand experiences of the damaging impacts of overuse on our trails, and brainstormed potential solutions.

Ingrid Peterec from the National Parks Service offered her perspective about how these issues are addressed in our national parks and discuss tactics New York State might use to better manage visitors to the forest preserves. And Katharine Petronis, Deputy Commissioner of Natural Resources at the New York State Department of Environmental Conservation discussed how New York is promoting sustainable use of state lands, particularly during the State’s ongoing response to the COVID-19 pandemic.

Sit back, enjoy the conversation, and drop us a note at [email protected] with any questions.

October 6, 2020--In recent years, US beekeepers have seen almost one-third of their hives decline. Bees pollinate 80% of the world's crops, including chocolate, coffee and almonds--without them, our food systems will fail. While there are many overlapping reasons for this ecological crisis, one of them is the overuse of toxic herbicides. In response, Mountainkeeper is mounting a campaign to get the worst of these herbicides off store shelves. Join us today--tell Home Depot and Lowe’s: stop selling glyphosate.

The University of Texas in Austin studied Roundup by taking 2,000 bees from a hive. One group was fed sugar syrup, while the other was given glyphosate. The bees who were fed the herbicide had intense gut infections, and only 12% survived.

Aside from compromising the well-being of pollinators, glyphosate is also a human health hazard. In fact, the World Health Organization named Roundup a carcinogenic back in 2015.

In 2019, Costco stopped selling Roundup because it causes cancer. Demand that Lowe’s and Home Depot take the same action to put human health and ecological conservation first. And please forward this email to a friend--we need all the help we can get standing up to the big box stores.

Mountainkeeper's Video: High Use & Overuse In the Catskills

October 1, 2020--It goes without saying that summer 2020 was unlike anything we’ve experienced before. The global pandemic changed much of our day-to-day lives, including the way we think about travel, vacations, and what we value in the places we love. Folks throughout our area and neighboring regions discovered--or rediscovered--the allure and splendor of the Catskill Park, one of New York’s two constitutionally protected “forever wild” parks.

But as the summer went on, many visitors discovered that the park did not feel very wild or pristine. Today Mountainkeeper is releasing a short film highlighting what was going on at some of the "hot spots" where we saw trash-littered trails, crowds of people overwhelming natural spaces, and cars creating traffic hazards as they lined roads that were never intended to accommodate parking. 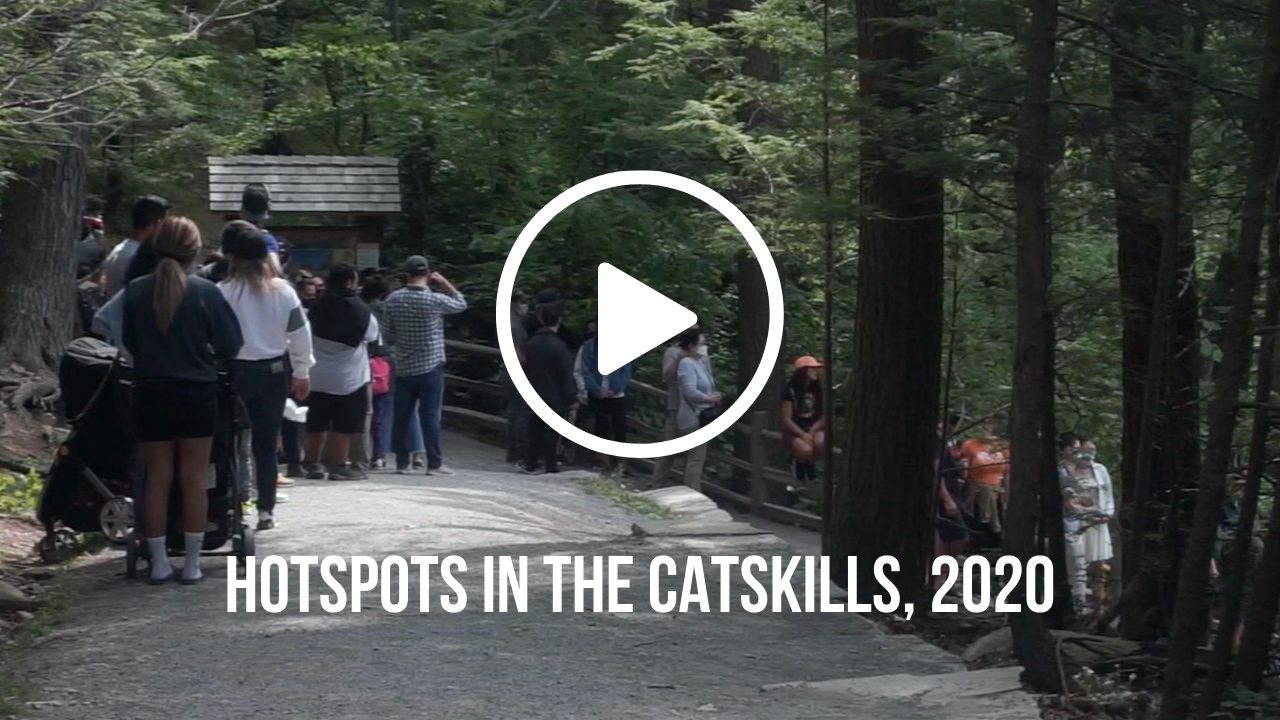 To be clear: parks across the state and nation saw a huge influx of visitors this summer and many of the agencies managing these lands struggled with the same problems. What we saw at the “hot spots” in our region is not the result of inaction or mismanagement by any one entity--we all have a role to play in protecting the park. But here in the Catskills, where focused attention on effective park management is a relatively recent phenomenon, we’re behind the eight ball.

The good news is that this is a problem created by people that can be solved by people working together. Our regional advocacy groups (including Mountainkeeper), state agencies, municipalities, and residents must take what we’ve learned from this summer and collaborate to devise better ways for people to get into the park safely, while protecting our natural resources. We need to maintain a welcoming, accessible park for visitors to enjoy, while conserving pristine wild places for the benefit of nature and the well being of all the creatures who live here.

Mountainkeeper is thrilled that so many New Yorkers are discovering the gem that is the Catskill Park; we are proud of our region and want to share its beauty and bounty with visitors from near and far. And we’re excited to work with friends like you--along with state agencies, municipal leaders, and others--to address these issues of high use and overuse head-on.