Head of BIA meeting with opponents of Sullivan casino 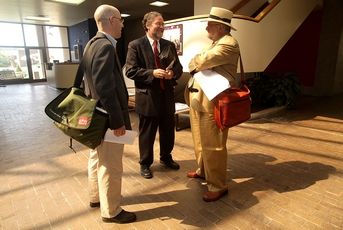 MONTICELLO - Robert F. Kennedy Jr. and other casino opponents spoke against Catskill casinos at a closed-door meeting this morning before the head of the Bureau of Indian Affairs.

Kennedy, who was representing the Riverkeeper and The Waterkeeper Alliance, made a conference call expressing concerns about the impact on the reservoirs, which provide drinking water to millions of residents in New York City.

“He was concerned that casino development would trigger sprawl and impact the water shed,” said Mark Izeman, a senior staff attorney for the Natural Resources Defense Council.

EchoHawk arrived in the lobby shortly after 10:30 a.m. and went directly into the meeting room, while casino opponents gathered outside the Government Center.

The meeting was closed to the public and EchoHawk plans this afternoon to hear from three Indian tribes and casino supporters in another closed-door meeting.

EchoHawk was invited by Congressman Maurice Hinchey, D-Hurley, who will attend all the meetings. Sen. Chuck Schumer is also expected to attend the meeting with casino supporters and will appear with EchoHawk and Hinchey at a news conference this afternoon. He took notes and made few comments, attendees said.

“The primary message is that there are two competing economic visions for Sullivan County,” Izeman said.

“One is the old giant casino model that will bring traffic spikes, degrade air quality and unplanned sprawl. The other vision is a sustainable economic development that will bring green jobs, clean tech, new universities and allow the Catskills to preserve its unique character.”

During the morning meeting, one casino opponent, Art Siegel, attempted to enter and was rebuffed by an aide to Hinchey. Siegel says he is recording a documentary on the gaming issue and was appalled at being shut out.

“I think it stinks,” Siegel said. “What do our elected officials have to hide from the public with respect to issues that are a concern to the general public and which are not a matter of National Security?”

Not all those in the anti-casino meeting were against a casino. Thompson Supervisor Tony Cellini, as the supervisor in the town where the casinos are proposed, was also invited to sit in on the first meeting. Cellini has been one of the biggest supporters over the years.

“I think they have had the opportunity to plead their case,” Cellini said. “The environmental studies have been completed.”

Both sides say EchoHawk's visit is significant and believe that the Obama Administration will review the policies of the Bush Administration that made it almost impossible to open an off-reservation casino. EchoHawk's staff would do most of the review in a casino proposal.

Asked whether he thought this would speed up the process, Cellini said, “Hopefully. It can't slow it down more than it already has.”

The Central Catskills Collaborative will meet from 6 to 8 p.m. Thursday to begin the development of the Corridor Management Plan for the nomination of a 50-mile stretch of state Route 28 as a Scenic Byway.

The meeting will be held at the Catskill Center for Conservation and Development on Route 28 in Arkville and is open to the public. Refreshments will be provided.

An overview of the Scenic Byway nomination process, the steps in completing the plan and the opportunities for community involvement will be highlighted with an open discussion will follow, presenters said.

Ben Murdock, Catskill Center Educator, will open the session with a discussion on the threats of invasive species and the relationships with travel corridors.

A scenic-highway designation would stimulate local economies through tourism and recreation and open the door to federal and state monies, according to proponents.

The Central Catskills Collaborative, a group of seven communities along the Route 28 Corridor, recently contracted with the Catskill Center to guide the development of a Corridor Management Plan, a requirement in the Scenic Byway nomination process.

The 50-mile section of Route 28 wends its way from West Hurley in Ulster County to the hamlet of Andes in Delaware County. The project is supported by a grant from the Catskill Watershed Corp.

Catskill Center Executive Director Lisa Rainwater said the Catskill Center was thrilled to partner with the Collaborative and formally begin the nomination process.

According to Scenic Byway program officials, a scenic byway is a road that has a story to tell through the preservation and promotion of a series of unique scenic, recreational, cultural and historical qualities. Successful nomination requires the preparation of a Corridor Management Plan, which is created through collective grass-roots efforts of the involved communities.

The Central Catskills Collaborative includes representatives from the towns of Andes, Hurley, Olive, Middletown, Shandaken and the villages of Fleischmanns and Margaretville. Earlier this year, the town of Olive, in conjunction with the Collaborative, secured a $50,000 award from the Catskill Watershed Corp.'s Local Technical Assistance Program.

As part of the project, The Catskill Center and the Central Catskills Collaborative will host a series of community meetings to define the project, gather information and identify volunteers.

Posted on Related News by Beth Scullion · August 20, 2009 6:28 AM
Is Crossroads Gambling?
Link to complete article is here:
http://www.phoeniciatimes.com/phoenicia/followup.html#2

The New York City Department of Environmental Protection placed legal advertisements announcing the initiation of the licensing process to install hydroelectric projects at four of the city's dams, but the Delaware County Electric Cooperative is not mentioned as a partner.

The proposed Western Catskills Hydro Project was introduced in May 2008 by the DCEC in its application to the Federal Energy Regulatory Commission for a permit. DCEC proposed building projects at the Cannonsville, Pepacton, Schoharie and Neversink reservoirs.

The DEP submitted a competing application in November. The DEP is the New York City agency that oversees city-owned reservoirs.

FERC awarded the city the permit in March while denying the DCEC's application, citing preference to municipal applicants. The DEP has since said it has no interest in developing hydroelectric capacity at the sites. It now says it wants to work with DCEC on a project.

Greg Starheim, chief executive officer of the co-op, said Friday that it appeared that the city "is continuing to head down a path to develop the project and that its actions are inconsistent with trying to develop a project with DCEC.

"It's frustrating," Starheim continued. "It they were serious about working with us we could have expedited the process. We are disappointed but it's not unexpected and it does raise questions."

DCEC is a nonprofit electricity cooperative that serves 5,100 members in 21 towns in Delaware, Otsego, Schoharie and Chenango counties.

Mercedes Padilla, DEP spokesman, said in a written statement, "DEP continues to work closely with DCEC. We have drafted a comprehensive Agreement in Principle between DEP and DCEC and are exchanging comments to come up with a final document.

"The agency remains hopeful that a mechanism will be found to work closely with DCEC on the development of this important project while ensuring the integrity and safety of the water supply system," Padilla continued.

"The DEP submitted the pre-application document for license to FERC as required by the terms of the permit. This provides an overview of the proposed project, the environmental setting, the plant and animal species in the areas and provides the basis for developing the scopes of any additional studies FERC may require," she wrote.

"In order to ensure that the public has an opportunity to comment on this submission, DEP advertised in the Binghamton Press Sun, Kingston Daily Freeman, Middletown Times Herald, Mountain Eagle and the Oneonta Daily Star."

Starheim said the DCEC has done everything they could in their proposed plan to protect the city's water. He added that DCEC officials have not been contacted by DEP officials.

"The city has credibility issues," Starheim said. "They are doing one thing and saying another." In July, Sen. Charles E. Schumer stepped in and urged the DEP to stop dragging its feet on generating hydropower at four city-owned Catskill reservoirs.

Schumer wrote a letter to the DEP urging it to speed negotiations with the co-op regarding DCEC's efforts to build hydroelectric plants and harness overflow at four reservoirs.

The DCEC's proposed Western Catskills Hydro Project involves installing modular-design independent-intake structures on the reservoirs' dams, Starheim said. The group plans to use water spilling from the reservoirs to generate enough electricity to power about 15,000 homes.

DCEC officials said they hoped to get final approval in 2011 and have the hydro plants open within a year or two after that.

The project, as proposed, Starheim said, would create 100 construction jobs and generate between $400,000 and $800,000 a year in revenue for watershed municipalities and co-op member school districts.

Calls to Schumer's office on Friday and Monday for comments on the city's initiation of the licensing process were not returned.

MONTICELLO – Luiz Aragon was born in Europe, raised in Switzerland and Brazil, and spent the past 20 with New York City’s Department of Housing Preservation & Development, including serving as a deputy commissioner.

He will be Sullivan County’s new Planning Commissioner, if confirmed by the county legislature later this week.  That would appear to be a formality.  The Executive Committee, consisting of the entire legislature, voted unanimously in favor of his confirmation.

“Coming up here has been, for me, a process that has actually happened over the past ten years.  I’ve had a second home in the upper Delaware River Valley.”

That home is in Shohola, just across the Delaware River in Pennsylvania.  He will be required to establish a permanent residence in Sullivan County.

Aragon says the difference between working in one of the world’s most challenging cities, and in pastoral Sullivan County, are not as different as one might think.

“It is different; the subject matter is slightly different.  But, the actual raw material is the same, which is the people.”

He says “the people” are the critical third link in what he defines as a ‘three-dimensional’ nature of the job:  the knowledge of planning that rests with the people he will be working with; the overlying government structure; then, the people themselves.

If all things come together, Aragon says that will give him what he needs to keep all levels of government, county and municipal, in the loop.

“Often enough, the impact of a project is not, sometimes, thought through.  I think that the planning division, in one of its biggest roles, is going to really think those things through and educate the different townships and share the information, so that the impact of progress, the impact of new projects, can be understood.”

If confirmed, Aragon will replace long-time planner Dr. William Pammer, who left to return to academia.  He will earn $85,000.

The county received almost 30 resumes after advertising the position in June.  Thirteen were interviewed, leaving a short list of three candidates.  The final decision was made last week.

“I think he will bring some additional tools to planning”, said County Manager David Fanslau.

One of those tools, proclaims Aragon, is confidence in the future of Sullivan County.

“Now, I’m a firm believer that here in Sullivan County, you have the necessary raw material to really build a renaissance.  I think that Sullivan County can be, and will be, the county of hope.”

KINGSTON — At this time last year, the Queen’s Galley was out of food and money, but this year the soup kitchen is just out of money...

A new wind power company with the goal of having a manufacturing facility in Greene County has joined the Greene Accelerator, the joint economic effort of the Greene County Industrial Development Agency and the Albany-based, not-for-profit Center for Economic Growth....

An oil company wants to suck one million gallons of water out of the West Branch of the Delaware River every day for a month — and will probably get permission to do so.

Is this the impact of the gas-drilling rush on trout fishing that many of us have worried about? Are blue-ribbon trout rivers about to be raided for water to run hydro-fracturing wells?...