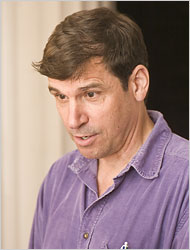 Chris Denton, a lawyer, has been studying oil and gas law.

Chris Denton first got a glimpse of his future and that of much of upstate New York back in April 1999 when he got a phone call to his solo-practice law firm from someone he knew in the petroleum industry. “Do you know about the Jimerson well?” Mr. Denton recalled being asked.

“Well, you’re going to have to start studying oil and gas law,” Mr. Denton said he was told. “That well came in in excess of 3,500 pounds per square inch bottom hole pressure. It’s like a Texas well. You won’t be able to do real estate law unless you start learning this stuff. There’s going to be a lot of drilling, it’s going to mean a lot of money, and you need to learn it now.”

He began studying the next morning.

Almost a decade later, the 58-year-old Mr. Denton, the son of an Army colonel who taught history at West Point, is still learning it. But he is one of a handful of people who have any grasp of the moving parts as the state lurches toward a new era of natural gas production in the Marcellus Shale formation, which in New York runs from Lake Erie across to the Catskills.

There are no guarantees, of course. Wells that look promising can be duds. Legislators could confound powerful gas industry lobbyists and slam on the brakes. Someone might invent a magic energy machine or a hydrogen fuel cell that could replace the gas sitting under pastures in the Catskills. Pigs could fly.

Far more likely is this: A frenzied land rush that is already making some landowners rich and infuriating others who leased their land too early for too little. Thousands of gas wells drilled upstate, many using more than a million gallons of water laced with dozens of toxic chemicals like hydrochloric acid, benzene, toluene and xylene, to fracture shale thousands of feet underground to release the gas trapped within it. Enormous questions about industrial noise, truck traffic and new roads gouged into hills; about holding ponds created to trap the polluted and spent water used in drilling; about land reclamation; about the effects on the New York watershed.

Mr. Denton has organized perhaps a hundred forums for farmers and landowners about the leasing process, how to protect themselves, what’s at stake. He has also put together several groups of landowners, each group controlling as much as 50,000 acres, so they have some leverage in negotiating economic and environmental issues with national and international energy companies.

He was in the audience at a forum last week, listening to the cautionary tales told by landowners from Wyoming and Colorado, noting the gas industry representatives, none of whom raised their hands when asked to identify themselves at the start of the meeting.

The meeting, organized by the Catskill Mountainkeeper environmental group, included both curious landowners and staunch environmentalists, many of whom wanted not to regulate gas drilling in the state, but to stop it.

“What I’m hearing is that some people have already given up,” said one woman near the front of the century-old Walton Theater here. “And if anybody wants me to make nice to someone who’s going to come and rape my land, that’s not going to happen. I don’t want to live in an industrial zone. I don’t want them here. And that’s what I want to talk about, how to keep them out. Not how to make nice with them.”

Mr. Denton, for what it’s worth, figures that stopping gas development can’t happen, and it shouldn’t.

It can’t because all the planets are lined up for vast gas exploration upstate. The price is high, and many of the people with land to lease are poor and desperate. Gas could be an economic bonanza for individuals and state government. The new horizontal drilling technology is far more sophisticated than ever. A similar formation, the Barnett Shale, has been a huge success in Texas, and gas companies are rushing to be sure they get a piece of the next hot play, which is the Marcellus Shale here.

“The place to put your money now is in the Northeast,” Mr. Denton said. “They’re not shooting for 15 or 20 percent return on equity. They’re looking for 200 or 300 percent every year. You might hit a dry well, but when you hit one, your return can be extraordinary.”

AND, in his view, the goal shouldn’t be to stop the drilling, because if we want our big cars and big houses and urban empires of light in the Northeast, we can’t expect to be an energy consumer and never a producer.

“The Amish are the only people who have any credibility about saying no,” he said. “They live what they espouse. If we want our gas-guzzling cars and S.U.V.’s and all the benefits of modern technological society, it’s a little hard to understand how we say no.”

Instead, the question more likely is: Do we do it right? And can we? Federal energy legislation promoted by the Bush administration in 2005 exempted the gas industry from many clean-air and clean-water regulations. Albany, where the state recently passed legislation that made it easier for the Department of Environmental Conservation to issue permits for horizontal drilling, may not be a great bet to do any better than the federal government.

The smell of money is in the air, and the game is just starting.