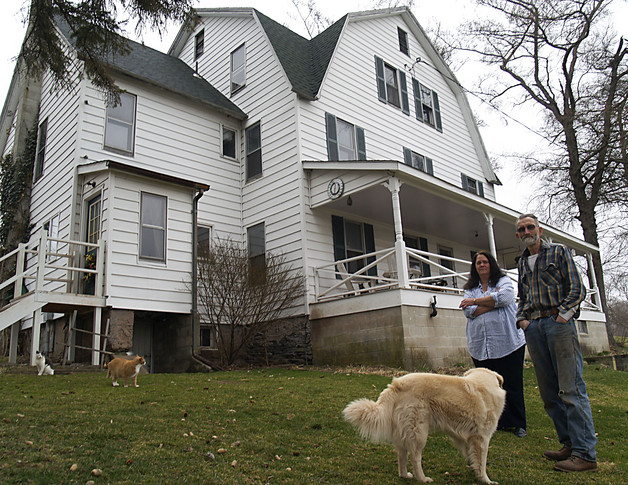 May 18 (Bloomberg) -- The Diehl farm in Delaware, New York, is a postcard-pretty place where honey is coaxed from beehives and maple syrup from trees.

The six-generation dairy farm, in operation since 1842, is one of many bucolic spots in the state where landowners are under financial, legal and sometimes neighborly pressure to lease their property to energy companies -- in a bad bargain that threatens the water supply of millions....

As rich as the topsoil is here in central New York’s Sullivan County near the Delaware River, it can’t compete with the enormous reserves of natural gas a mile below the surface. The Diehls have watched in horror as their neighbors have lined up to lease their land.

“This is what it’s all about,” says Pete Diehl, 65, holding up a glass of tap water after we lunch on pancakes and extremely fresh maple syrup.

Tapping into the natural-gas reservoir far below ground requires hydraulic fracturing, known colloquially as “fracking.” For an average operation, the process involves drilling 5,000 feet or more down and a comparable distance horizontally, then forcing 3 million to 8 million gallons of water and 80 tons to 300 tons of chemicals into the bores to extract the trapped gas.

The Diehls refuse to lease their land, yet they fear their well water will be fouled by fracking chemicals or other contaminants dredged up in a process that might affect broad stretches of local aquifers. Area landowners with well water aren’t the only ones who should be worried. There are also the 8.2 million people in New York City who, like me, get their water from the 2,000-square-mile watershed, some of it in Sullivan County.

“I’m really furious that people are considering this,” says Alice Diehl, 58. “All for the good ol’ dollar.”

A mother of four and grandmother of 11, Alice Diehl exudes a powerful combination of domestic warmth and no-nonsense authority. She recently testified before Sullivan County legislators, who then voted to ban drilling on county land.

“I told them, ‘You people are in charge of the well-being of every citizen in this county,’” Diehl says.

Chesapeake Energy Corp. has leased 1.6 million acres over the Marcellus shale, as the natural-gas reserve underneath parts of New York, Pennsylvania and West Virginia is known. Its joint venture partner, Statoil ASA, controls an additional 590,000 acres.

“It’s a hell of a lot of New York,” says Ramsay Adams, the director of advocacy group Catskill Mountainkeeper. “We’re really talking about industrializing New York like never before, ever. It’s incredible what’s at stake, polluting half the state.”

The temptation to lease is strong, with landowners being offered as much as $6,000 an acre, plus royalties -- although the terms of leases vary considerably. Still, that kind of money would come in handy for cash-strapped farmers.

Local governments also have their hands out. In March, Pennsylvania state Senator Andy Dinniman proposed a 5% tax on Marcellus gas profits, a levy that would raise an estimated $500 million for the state by 2014. New York, with its $9 billion budget gap, is taking notice.

Complicating the matter on the New York side of the border is an odious state rule known as “compulsory integration,” in which even resistors like the Diehls will have to let the fracking commence on their land if enough of their neighbors sign on the dotted line.

The tension is driving a wedge between neighbors and, in the case of the Diehls, family. Pete Diehl’s two brothers, who co-own almost 800 acres of farmland here, are lobbying to cut a leasing deal.

Chesapeake holds less than 5,000 acres in the watershed, and it promised last year it would not frack on these holdings. The New York City Council passed a resolution calling on the state to prohibit fracking altogether.

“New York City is smart,” says Adams. “It said, ‘What the hell are you talking about? Get the hell out of our watershed.’”

I liked the tough talk too, but it’s highly doubtful the resolution will have jurisdictional teeth. Fracking Marcellus appears to be inevitable, and the state is now working out rules to regulate it.

New York has the advantage of watching Pennsylvania’s progress -- and missteps -- before committing itself. Adams showed me aerial photographs of Dimock, Pennsylvania, which has been getting fracked since 2008. Drilling rigs, trucks and open pools of fouled water and sediment stand out in the middle of what was obviously verdant farmland.

New York, where natural gas accounts for a quarter of its energy needs, is ripe for the fracking. Let’s hope they do it the right way. One good sign: This month the Delaware River Basin Commission voted unanimously to draft new regulations for drilling within the basin before issuing any new permits.

(Mike Di Paola writes about preservation and the environment for Bloomberg News. The opinions expressed are his own.)

To contact the writer of this column: Mike Di Paola at [email protected].