“It’s a feel good, feel bad resolution … feel good for some, feel bad for the others.  But, it fires people up, unfortunately, for nothing, 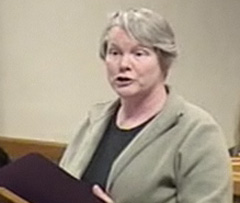 in the end”, said Donaldson, noting that the legislature has nothing to say about the project at this point.

That was a point made by the three legislators who opposed the resolution, including Donald Gregorius, who argued the vote is seriously premature, coming before the release of a supplemental environmental impact statement.

“In my opinion, it is foolish to vote on something that we have little or no detailed information about.  I ask the same question now, as I did last week – why are we asked to endorse a project just weeks before we can get information that will give us a real basis for our vote.”

Other legislators spoke enthusiastically for the resolution, citing short term and long term jobs, and jumpstarting the economy of the Shandaken area.

Those were points made by more than 20 speakers during an hour-long public comment period.  They were split about two-to-one in favor of Belleayre.

Joe Kelly is with the Coalition to Save Belleayre.  Kelly contends neighboring counties, including Greene, are way ahead of Ulster in welcoming economic development.

Catskill Heritage Alliance co-chair Kathy Nolan says there is good reason why this has lingered for 11 years.  Nolan said it all has to do with a defective project that has not corrected problems noted in the initial EIS, and in a report issued by the state comptroller in 2006.

After all the talking, by citizens and the legislature, the resolution passed, with ‘no’ votes from Democrats Gregorius, Brian Shapiro and Robert Parete.

As was noted, it has little official impact.  But, Crossroads Venture principal Dean Gitter argued, during an informational session last week, that just the endorsement of the legislature, and pledge to work to move the project forward,  may be enough to finally get his downsized by still sweeping project in gear