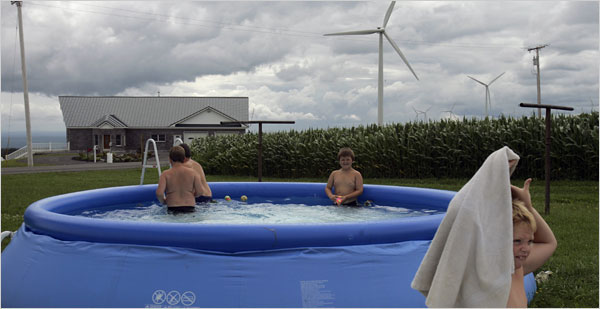 The Maple Ridge Wind farm near Lowville, N.Y. It has been forced to shut down when regional electric lines become congested.

When the builders of the Maple Ridge Wind farm spent $320 million to put nearly 200 wind turbines in upstate New York, the idea was to get paid for producing electricity. But at times, regional electric lines have been so congested that Maple Ridge has been forced to shut down even with a brisk wind blowing.

Articles in this series are examining the ways in which the world is, and is not, moving toward a more energy efficient, environmentally benign future.

"Massive wind farms in the Dakotas are great . . . but they aren't going to provide power to many big urban centers (if any) because that transmission loss is going to be a killer. "

That is a symptom of a broad national problem. Expansive dreams about renewable energy, like Al Gore’s hope of replacing all fossil fuels in a decade, are bumping up against the reality of a power grid that cannot handle the new demands.

The dirty secret of clean energy is that while generating it is getting easier, moving it to market is not.

The grid today, according to experts, is a system conceived 100 years ago to let utilities prop each other up, reducing blackouts and sharing power in small regions. It resembles a network of streets, avenues and country roads.

While the United States today gets barely 1 percent of its electricity from wind turbines, many experts are starting to think that figure could hit 20 percent.

Achieving that would require moving large amounts of power over long distances, from the windy, lightly populated plains in the middle of the country to the coasts where many people live. Builders are also contemplating immense solar-power stations in the nation’s deserts that would pose the same transmission problems.

The grid’s limitations are putting a damper on such projects already. Gabriel Alonso, chief development officer of Horizon Wind Energy, the company that operates Maple Ridge, said that in parts of Wyoming, a turbine could make 50 percent more electricity than the identical model built in New York or Texas.

“The windiest sites have not been built, because there is no way to move that electricity from there to the load centers,” he said.

The basic problem is that many transmission lines, and the connections between them, are simply too small for the amount of power companies would like to squeeze through them. The difficulty is most acute for long-distance transmission, but shows up at times even over distances of a few hundred miles.

Transmission lines carrying power away from the Maple Ridge farm, near Lowville, N.Y., have sometimes become so congested that the company’s only choice is to shut down — or pay fees for the privilege of continuing to pump power into the lines.

Politicians in Washington have long known about the grid’s limitations but have made scant headway in solving them. They are reluctant to trample the prerogatives of state governments, which have traditionally exercised authority over the grid and have little incentive to push improvements that would benefit neighboring states.

In Texas, T. Boone Pickens, the oilman building the world’s largest wind farm, plans to tackle the grid problem by using a right of way he is developing for water pipelines for a 250-mile transmission line from the Panhandle to the Dallas market. He has testified in Congress that Texas policy is especially favorable for such a project and that other wind developers cannot be expected to match his efforts.

“If you want to do it on a national scale, where the transmission line distances will be much longer, and utility regulations are different, Congress must act,” he said on Capitol Hill.

Enthusiasm for wind energy is running at fever pitch these days, with bold plans on the drawing boards, like Mayor Michael Bloomberg’s notion of dotting New York City with turbines. Companies are even reviving ideas of storing wind-generated energy using compressed air or spinning flywheels.

Yet experts say that without a solution to the grid problem, effective use of wind power on a wide scale is likely to remain a dream.

The power grid is balkanized, with about 200,000 miles of power lines divided among 500 owners. Big transmission upgrades often involve multiple companies, many state governments and numerous permits. Every addition to the grid provokes fights with property owners.

These barriers mean that electrical generation is growing four times faster than transmission, according to federal figures.

In a 2005 energy law, Congress gave the Energy Department the authority to step in to approve transmission if states refused to act. The department designated two areas, one in the Middle Atlantic States and one in the Southwest, as national priorities where it might do so; 14 United States senators then signed a letter saying the department was being too aggressive.

Energy Department leaders say that, however understandable the local concerns, they are getting in the way. “Modernizing the electric infrastructure is an urgent national problem, and one we all share,” said Kevin M. Kolevar, assistant secretary for electricity delivery and energy reliability, in a speech last year.

Unlike answers to many of the nation’s energy problems, improvements to the grid would require no new technology. An Energy Department plan to source 20 percent of the nation’s electricity from wind calls for a high-voltage backbone spanning the country that would be similar to 2,100 miles of lines already operated by a company called American Electric Power.

The cost would be high, $60 billion or more, but in theory could be spread across many years and tens of millions of electrical customers. However, in most states, rules used by public service commissions to evaluate transmission investments discourage multistate projects of this sort. In some states with low electric rates, elected officials fear that new lines will simply export their cheap power and drive rates up.

Without a clear way of recovering the costs and earning a profit, and with little leadership on the issue from the federal government, no company or organization has offered to fight the political battles necessary to get such a transmission backbone built.

Texas and California have recently made some progress in building transmission lines for wind power, but nationally, the problem seems likely to get worse. Today, New York State has about 1,500 megawatts of wind capacity. A megawatt is an instantaneous measure of power. A large Wal-Mart draws about one megawatt. The state is planning for an additional 8,000 megawatts of capacity.

But those turbines will need to go in remote, windy areas that are far off the beaten path, electrically speaking, and it is not clear enough transmission capacity will be developed. Save for two underwater connections to Long Island, New York State has not built a major new power line in 20 years.

A handful of states like California that have set aggressive goals for renewable energy are being forced to deal with the issue, since the goals cannot be met without additional power lines.

But Bill Richardson, the governor of New Mexico and a former energy secretary under President Bill Clinton, contends that these piecemeal efforts are not enough to tap the nation’s potential for renewable energy.

Wind advocates say that just two of the windiest states, North Dakota and South Dakota, could in principle generate half the nation’s electricity from turbines. But the way the national grid is configured, half the country would have to move to the Dakotas in order to use the power.

“We still have a third-world grid,” Mr. Richardson said, repeating a comment he has made several times. “With the federal government not investing, not setting good regulatory mechanisms, and basically taking a back seat on everything except drilling and fossil fuels, the grid has not been modernized, especially for wind energy.”