Mike Greenlar
link to complete article is here:
http://www.syracuse.com/news/index.ssf/2009/04/central_new_york_rep_john_mchu.html
The Post StandardMoss Lake in the Central Adirondacks is shown in the morning hours. A bill has been introduced in Congress that's designed to improve the quality of lakes in the Adirondacks. 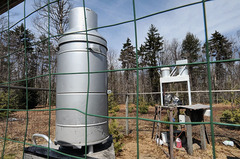 See a slideshow of photos from the Adirondacks

Washington -- A Central New York congressman, seeing an opportunity that may never come again, has introduced a bill requiring the most drastic cuts in U.S. history to the pollution responsible for acid rain.

Rep. John McHugh said he wants to tie his "Acid Rain and Mercury Control Act" into a landmark energy and climate change bill that Congress will begin considering this week, with the goal of a vote by June.

The climate legislation to control greenhouse gases received a boost last week when the U.S. Environmental Protection Agency ruled that global warming is a danger to public health and welfare.

The EPA's action sets the stage for the federal government to regulate carbon dioxide pollution and five other greenhouse gases linked to climate change.

But the EPA, and the separate global warming bill making its way through Congress, do not address all of the pollution from coal-fired power plants. The pollution contributes to acid rain, which has devastated lakes and forests in New York for decades. Among the pollutants that McHugh wants to target is mercury, which also poses a risk to human health.

McHugh, R-Pierrepont Manor, who proposed a similar bill to tackle acid rain in 2007, said he believes now is the best chance to finally solve the problem with federal legislation.

"One of the primary motivators for reintroducing the bill at this time is because of the debate surrounding climate change," McHugh said. "I didn't want acid rain to be left out."

He added, "The carbon debate has taken center stage. My deepest concern is that if something is passed and signed into law without an acid rain component, it may be a long time before we have a chance to focus on that issue again."

The acid rain problem has taken on added urgency after a recent study found a dangerous link with global warming. The study found increased leaching of harmful nitric acid from warming soils in the Appalachians.

McHugh, whose 11-county district stretches from Madison and Oswego counties into the Adirondacks, has already picked up bipartisan support from his Central New York colleagues in the House delegation. Both Reps. Dan Maffei, D-DeWitt, and Michael Arcuri, D-Utica, have signed on as co-sponsors of the McHugh bill.

McHugh's legislation would require coal-fired power plans to make some of the most ambitious pollution cutbacks ever mandated by the federal government. 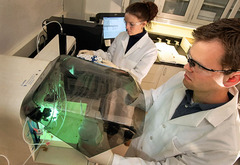 David Lassman / The Post-Standard Lab intern Danielle Lichtenstein (left) and PhD candidate Colin Fuss do a test for dissolved organic carbon as part of an acid rain project in a lab at Link Hall on the Syracuse University campus.

New York's Adirondack and Catskill mountains are particularly hard hit because their soils are more sensitive to acid rain than any other place in the nation.

Studies have shown that about 40 percent of Adirondack lakes are either always or sometimes acidic. Up to 25 percent of the lakes surveyed have been declared essentially dead, supporting no fish life.

To address the problem, the McHugh bill would:

• Require power plants to make a 90 percent reduction in mercury emissions from current levels by 2013.

• Authorize $13.6 million per year through fiscal year 2018 to implement the requirements of the legislation.

• Allow power plant owners to use market-oriented mechanisms to comply with the new standards, such as trading in pollution credits.

McHugh said the reason for the strict mercury controls is the fact that the toxic chemical has been linked to neurological and kidney disorders, particularly in the development of fetuses.

"I think this is as aggressive a proposal as I have ever seen," said Syracuse University professor Charles Driscoll, one of the nation's leading acid rain scientists.

Driscoll said the timing of the proposed federal legislation on both climate change and acid rain is important because recent studies show that under higher temperatures soils are less able to retain nitrogen, which leaches into water as nitric acid.

"I think there is some urgency," Driscoll said. "It looks like there are some interactions to climate and acid rain.

The Adirondack Council, the largest advocacy group for the 6 million-acre Adirondack Park, agrees with McHugh that momentum could be strong enough in Congress to finally pass acid rain legislation. 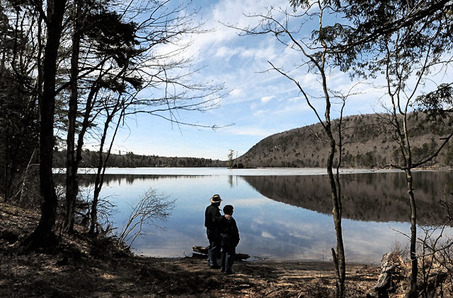 Mike Greenlar / The Post-StandardKevin and Diane Roy, of Oneida, watch a loon as they stand at the shore of Moss Lake in the Central Adirondacks. The Roys have been coming to Moss Lake for 25 years. A bill has been introduced in Congress that's designed to improve the quality of lakes in the Adirondacks.

"I think our chances for an acid rain bill are better than they were last year, and they continue to improve with leadership from the White House," Sheehan said. "Ultimately, our chances have not been this good in a decade. We literally could not get the Clinton-Gore administration to say the words 'acid rain.' They did not want to deal with the issue."

The administration of former President George W. Bush attempted to regulate smokestack pollution with its Clean Air Interstate Rule, affecting 28 states. A federal appeals court struck down those rules last year, saying the Bush administration overstepped its authority in trying to curb the pollutants that cause smog, soot and acid rain. The pollution travels from Midwestern power plants and damages Northeastern forests and lakes.

The court defeat left coal-fired power plants as the largest source of mercury emissions in the United States that are unregulated on the federal level.

McHugh said he knows his new bill may not pass as standalone legislation. But he said he remains hopeful that the climate change bill sponsored by Reps. Henry Waxman, D-Calif., and Edward Markey, D-Mass., will include all or part of his acid rain legislation.

"I am most interested in ensuring that, however these issues go forward, that acid rain is part of the discussion," McHugh said. "The bill is intended as a reference tool, so if somebody asks what we should be doing, we have a bill that has already been printed up and is ready to go."